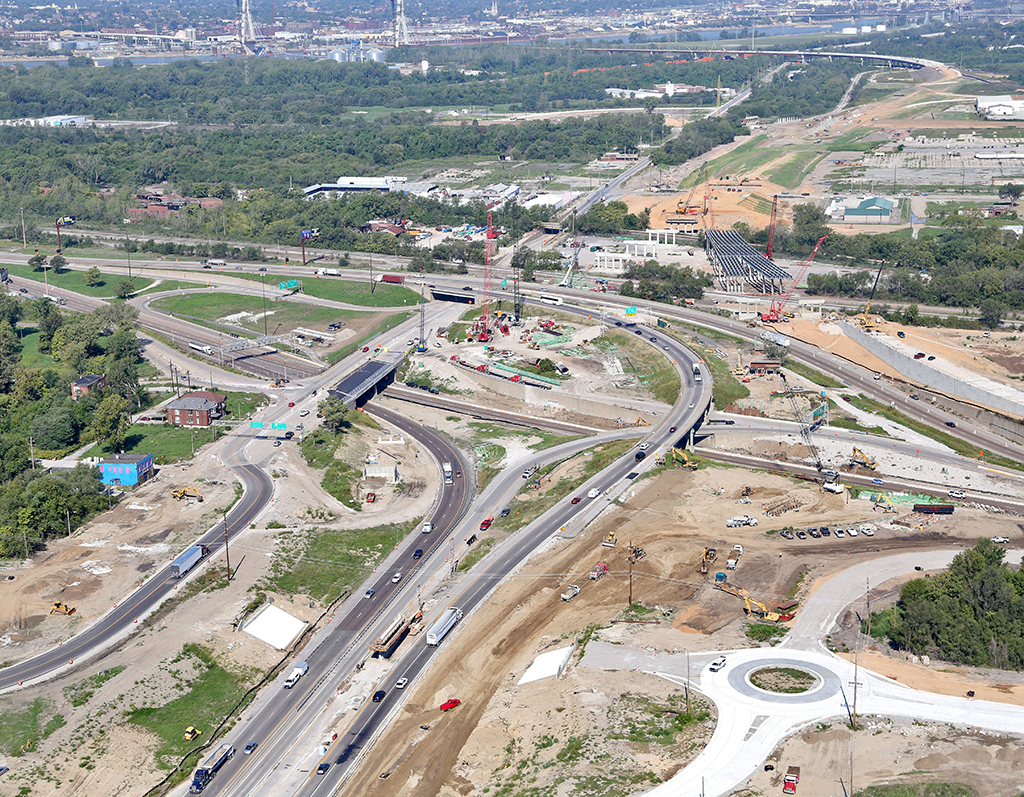 Over the past five years Kaskaskia Engineering Group has been involved in many facets of the new Mississippi River bridge project, working on multiple engineering teams.
To speed up the project, the Illinois Department of Transportation split the Illinois work into three pieces and selected different engineering firms for each piece. There was the Illinois approach structure that ran from Interstate 55 to the new bridge; the relocation of I-70 bridges including the interchange with relocated Illinois Route 3; and there was the “Tri-Level” where I-64 and I-55 come together and I-70 splits off to run west to the bridge.
Another group was selected to provide overall project support. KEG was a member of all of the teams.
“The engineering industry as a whole has really learned to collaborate together and to work together as one entire seamless community when we’re working on a project,” said Geri Boyer, company president. We’re competitors sometimes but we are partners at other times. We’re all friends and we understand each other’s strengths and weaknesses and we focus on what we’re best at. It’s a ton of fun because we get to work with our friends. We love that.”
Being a member of all the teams meant that KEG’s work was widely varied. For example, KEG engineers worked on a new roundabout at 18th Street and Baugh Avenue. 18th Street serves as an entrance to Emerson Park, a high-quality housing development in East St. Louis. They also created plans for the reconstruction of Ramp D and Baugh Avenue; plans for improvements to the existing combined sewer system; and plans for the widening, milling and resurfacing of St. Clair Avenue.
The engineering firm also participated in the preparation of engineering plans for two more IDOT contracts involving roundabouts at the intersection of Ninth Street and St. Clair Avenue and another at the intersection of Ninth Street and Baugh Avenue.
KEG also participated in the preparation of the construction contract documents for improvements to the I-55/I-70 Ramp P, I-64/I-55/I-70 Ramps I and J, I-64 Ramp D, St. Clair Avenue, Baugh Avenue, Illinois Route 3, Ninth Street and 18th Street. All of these transportation infrastructure projects for client IDOT were located within the city of East St. Louis.
“Our main specialty is anything that supports transportation projects,” Boyer said. “So, not only can we design a roadway but we can also do the geotechnical analysis for it. We do a lot of environmental work and utility coordination. We even negotiate land for right of way. We are kind of a jack of all trades and it’s really nice to have all those little niches so that we can help the big players.”
Perhaps the most complex job KEG undertook as part of the project was surveying, excavating, relocating and redesigning the utilities at the St. Louis National Stockyards property in Fairmont City. Because the new I-70 connector’s trajectory cut the stockyards and the live utilities buried beneath them in two, it was necessary to design new connections for water, storm sewer, sanitary sewer, gas and electric power so that both sides of the property would be served and attractive for future development, he said.
“We also coordinated with IDOT on where the approach was going to go so that all of the parties got what they needed to be successful,” Boyer said. “Like the stockyards people said, it was like the adage of making a silk purse out of a sow’s ear. They didn’t think that anything would ever happen with that property — that it would just sit there vacant — and now it is going to be a real economic generator for the area.”
With 45 employees, KEG was also working on other projects in the area — the Chicago to St. Louis high speed rail line and the new I-64 interchange for Scott Air Force Base, for example — but, the new Mississippi River bridge project will be one to remember, he said.
“We’re really grateful to have had the opportunity to work on such an amazing project,” Boyer said, “a project that’s going to be standing for a long time that we can show our grandchildren. It really does take a village to build a bridge, that’s for sure.”