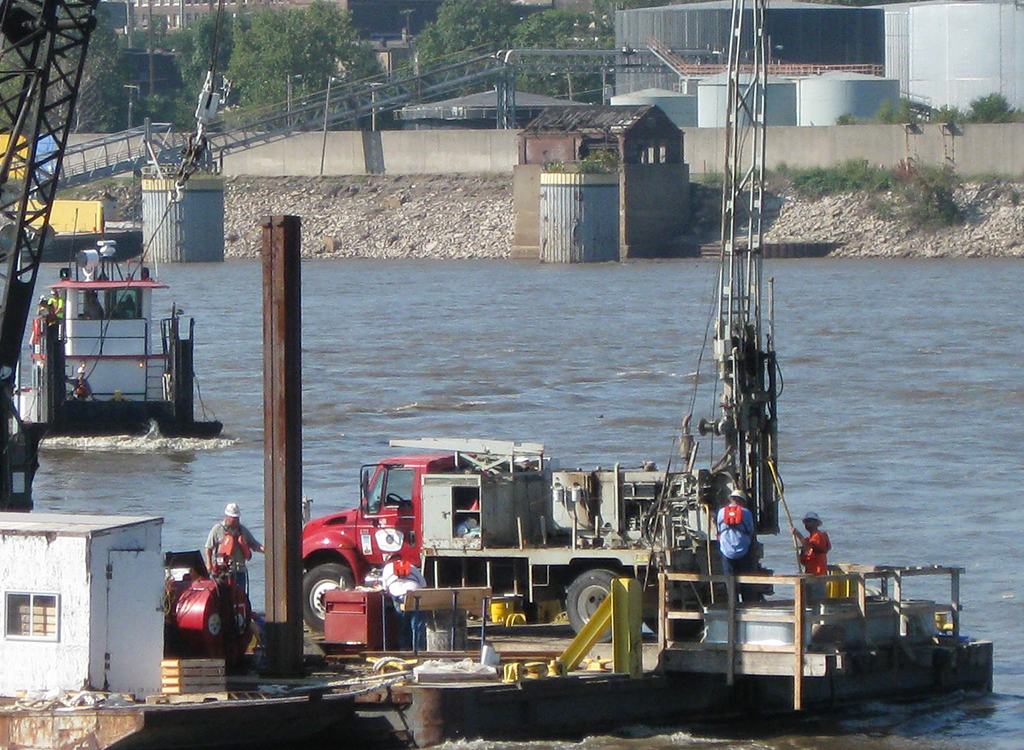 Geotechnology, Inc. was one of the first firms involved in the design of the new Mississippi River bridge, providing geotechnical work on the original design. That design eventually had to be greatly modified in order to whittle approximately $1 billion off the price tag.
The St. Louis-based firm drilled down into the bedrock below the river to provide the geotechnical information necessary to design the bridge piers. It also provided much of the geotechnical expertise on the what’s referred to as the “Tri-Level,” where Interstates 64 and 55 come together and I-70 splits off to head north before curving west across the river. Dale Smith was the senior project manager on the Tri-Level job.
Smith said that they took some 300 borings during two design phases at structure, slope and retaining wall locations in order to understand the stratigraphy in the Tri-Level construction area.
A major consideration in that area was protecting the dewatering system used to remove groundwater and stormwater from the Tri-Level intersection. Smith described it as a huge collection system with a 6-foot diameter pipe draining the groundwater and surface water into a vault approximately 60 feet below grade where a series of large pumps lifted the water up, discharging into nearby surface channels.
Building the roadways, embankments and retaining walls that were necessary to construct the Tri-Level puts enormous pressure on the soils below. Normally, such pressure would cause the soil to compress over a long period of time. But that time wasn’t available as the entire project was fast-tracked for completion in just four years. Designing the systems to make it possible to build massive structures above the underground piping with minimum delay and allowing for only a half-inch of settlem sent at the main pipe level was the job of Geotechnology.
“We provided the piling recommendations, the foundation recommendations, the retaining wall recommendations, the slope stability, the settlement and the length of settlement designs,” Smith said.
And innovative solutions were created such as using light weight fill with a unit weight of only several pounds per cubic foot under the westbound I-70 ramp to reduce the pressure and settlement impacts below.
“It reduced the weight applied to the ground surface which caused less settlement, and let us meet that less than half inch criteria that was established to protect that 6-foot pipe,” Smith said.