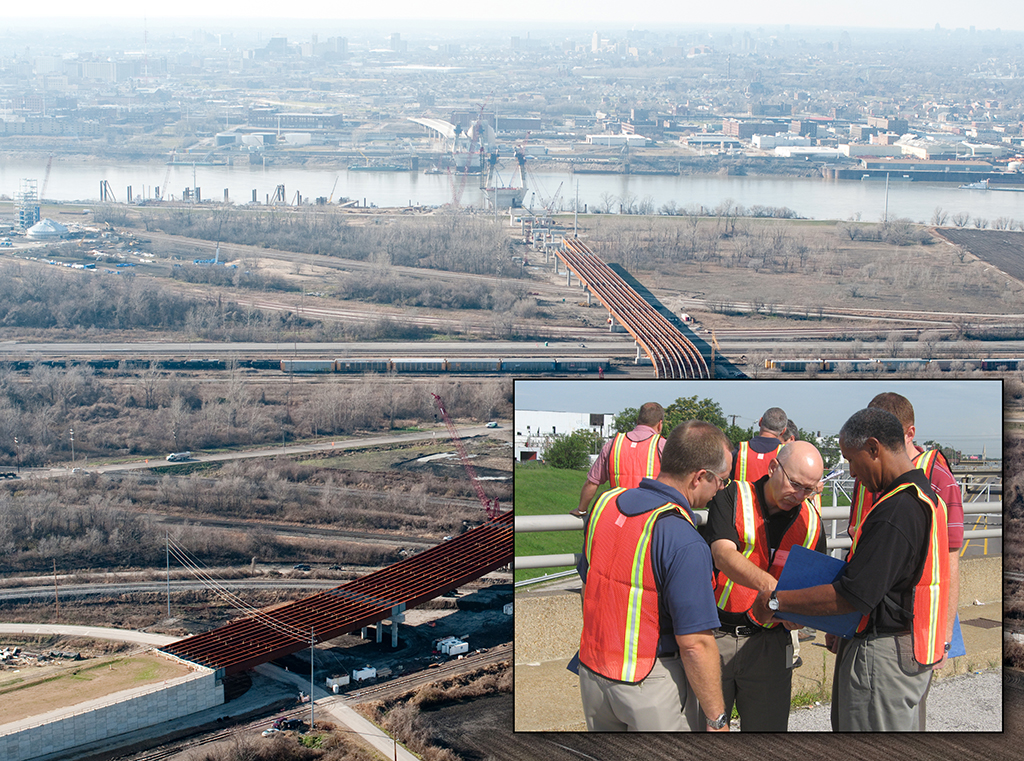 Crawford, Murphy and Tilly, Inc. began its work on the new Mississippi River bridge project in late 2008. By the end of 2009, CMT’s engineers had completed their design.
CMT is a full-service consulting engineering firm that specializes in four areas: aviation, highways and bridges, water and wastewater and land development. Greg Law is CMT’s highways and bridges group manager in the firm’s St. Louis office. He was the project manager for the I-70 interchange on the Missouri side. CMT was the lead engineer on both the Missouri side interchange and the Illinois approach which ran from St. Clair Avenue to connect with the bridge.
Law said the difference in soil composition between the two sides of the river was dramatic.
“The soils on the Missouri and Illinois sides are totally different,” he said. “The Illinois side is alluvial silt and clay — essentially river bottom — so, it called for a totally different foundation system than we used on the Missouri side. On the Missouri side you hit rock 30 feet below ground whereas you weren’t hitting rock for 100 feet or more on the Illinois side.”
And, once bedrock was reached, shafts had to be drilled into the rock 18 to 20 feet deep in order to provide stability for the massive structure above.
The wide range of geotechnical conditions was not the only complicating factor in engineering the design, according to Law. On the Missouri side, much of the focus was on taking the structure through a relatively densely developed area while trying to minimize impacts on area businesses.
In Illinois, consideration had to be given to sidestepping three different railroads and minimizing impacts on existing infrastructure like overhead power lines and access roads for levees and utilities.
“Utilities would pop up in the strangest places,” Law said. “We really tried to anticipate them but there are always utilities that pop up, especially in a city this old with that much infrastructure underground. That was a big challenge on the project. We do our due diligence in getting geotechnical information, but there are always differing conditions once you start putting piles and foundations in.”
Both sides had archeological issues to deal with. In fact, while it was underway, the archeological excavation of an ancient Mississippian village on the Illinois side was the largest such project in the United States.
Another complicating issue was the overall project was much larger than just a bridge. There were actually several large construction projects being designed and built that had to tie into one another on the Missouri side. There was the bridge itself; the Missouri-side interchange with existing I-70; and the connection with Tucker Boulevard in downtown St. Louis.
On the Illinois side there was not only the approach to the bridge but a tie in to Illinois Route 3 and what’s referred to as the Tri-Level project where I-64 and I-55 come together and I-70 splits off and heads west. From a cost perspective, the bridge was only about one-fourth of the overall project.
For the sake of time, different firms were hired to engineer the various pieces of the complex project — each of them using a team of subcontractors performing various investigation, design and quality control functions. Finely tuned teamwork was of the essence. Law said the Missouri Department of Transportation and the Illinois Department of Transportation did an extraordinary job of building and maintaining that teamwork.
“IDOT and MODOT set up a project office where all of the consultants that worked on all of these different jobs all worked out of the same office,” Law said. There was MODOT, IDOT, the Federal Highway Administration, all the prime consultants — the one doing the main span, the Illinois approach, the Missouri approach and the interchanges were all in that office. The result was that we were able to make decisions quickly. I really give a lot of credit to MODOT and IDOT for thinking about this project office because it kept us on track. There was a very accelerated design schedule on this project and everybody hit their schedules. We really worked together as a team,” Law added. “That was a real bright spot of the project.”