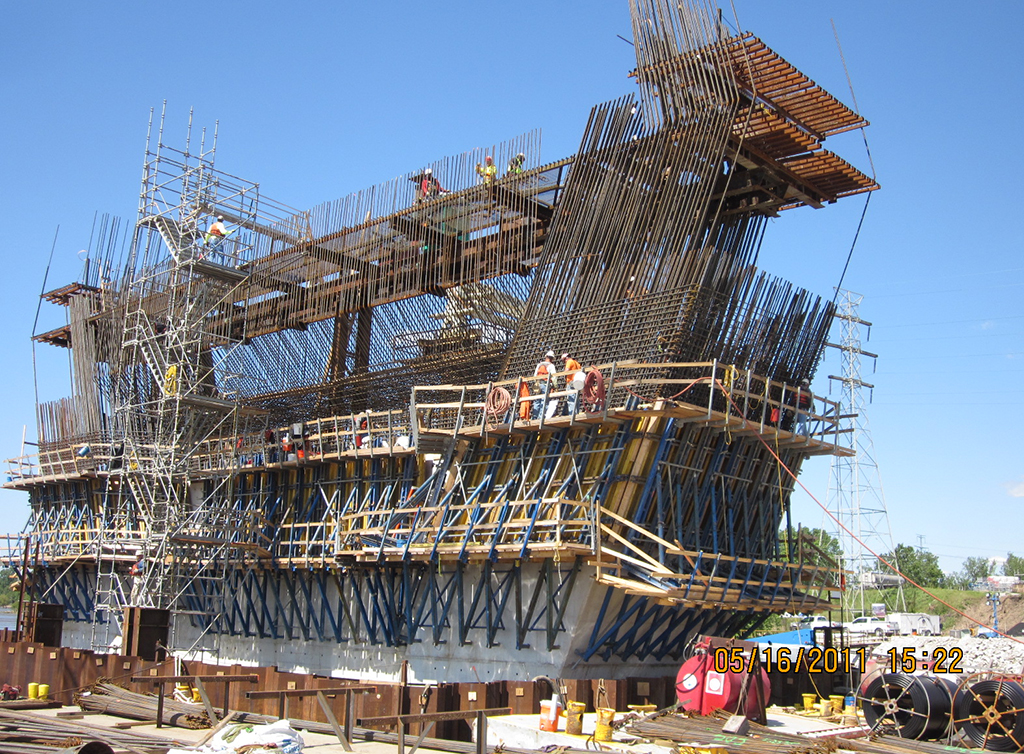 One hundred and 40 years after the Eads Bridge first connected Missouri and Illinois, the Stan Musial Veterans Memorial Bridge is open for traffic.
Construction of the bridge itself was the job of a joint venture comprised of Kansas City, Mo.-based Massman Construction, Traylor Bros., Inc. from Evansville, Ind., and Alberici Constructors, Inc. of St. Louis. Massman was the project sponsor.
“In February 2010 we began rock core sampling in the river,” said Mark Schnoebelen, Massman vice president. “That was the first work that was performed on site, so it was almost exactly four years from the time that we did the first bit of work to the time that it opened.”
Over the past couple of years, the team has had to deal with some challenging working conditions. River levels ranged from very high for an extended period of time in 2011 to extremely low through the summer of 2013. Temperatures went from scorching hot 100-degree days during the summer of 2012 to the recent slam of arctic cold air. Despite the adversity, the project was completed one month early and on budget.
“The engineers and the departments of transportation did an excellent job of designing the project,” Schnoebelen said. “There were very few change orders. In fact, the contract value increased by less than a 10th of a percent, which is extraordinary.”
To overcome the weather and river challenges and keep on schedule, it was necessary to work double shifts, six days a week for a year and a half, he said, adding: “Even though this was a four-year project, it was four years of fast-track construction.”
The “Stan Span” is the third-longest cable-stayed bridge in the country with a span of 1,500 feet. According to Schnoebelen, cable-stayed bridges have become popular because they make very efficient use of materials. The 405-foot tall towers are hollow just above the roadway with ladders and stairs that go all the way to the top. Each is anchored by six concrete piers that are 11.5 feet in diameter and founded 20 feet deep into the bedrock. The footings themselves are 20 feet thick. There are about 15 million pounds of structural steel, 160 million pounds of concrete and 650 miles of stay cable.
The bridge was built using the balanced cantilever method. Both towers were worked on simultaneously, and structural steel was hung by cables suspended from the tower peaks, first on one side and then the other. The process continued back and forth until the deck hung from each tower reached 750 feet across the river. The two sides were joined last summer — a process that calls for a bit of finesse.
“It went very well,” Schnoebelen said of joining the two sides. “We did jack the bridge span apart by about 3 inches in order to insert the final piece of steel. There are a number of variables that affect the installation of the closure piece such as ambient temperature, sun vs. shade, wind, etc., but, as long as you know what to expect, you can plan and adjust accordingly.”
Concrete slabs that were poured off site, were laid as the structural steel was extended. Two inches of latex concrete was applied over the slabs. St. Louisans are familiar with the tribulations of the Poplar Street Bridge surface, which seems to constantly be under repair but that won’t be an issue on the Stan Span, Schnoebelen said.
“The Poplar Street Bridge has a steel deck underneath the overlay,” he said, “and for long time the DOTs had a hard time getting the various overlays to stick to the steel. We don’t have that issue here. This is proven overlay on top of concrete and that’s something that both MODOT and IDOT have been successfully doing for years on different bridges.”
Schnoebelen estimated that there were only about 140 workers on the bridge at any one time. There are only so many places for people to work, he noted.
Massman builds major river bridges nationwide so as work ends on this project, work begins on another one.
“A lot of the folks that built this bridge are moving on to build two cable-stayed bridges between New York and New Jersey,” Schnoebelen said.