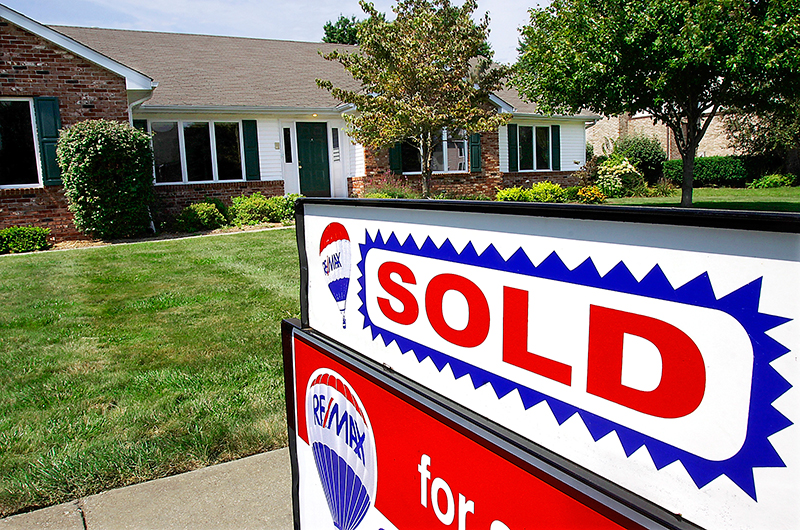 The door is finally cracking open to improvements in the housing market, and local realty agents are offering cautious but hopeful projections for 2014, despite the wintry setback of the last several weeks.
Realtors in St. Clair, Monroe and Clinton counties sold more homes in 2013 than they did in the previous five years, according to Tricia Tialdo, president of the Realtor Association of Southwestern Illinois.
It’s a trend mirrored throughout the state, comparing year to year.  Illinois saw an overall 18.9 percent increase in closed sales from 2012 to 2013, according to the Illinois Association of Realtors. Median sales prices jumped from $138,500 to $150,000 in the same span. The median is a typical market price where half the homes sold for more and half sold for less.
In what the state association calls its Metro-East MSA, which is made up of the above counties and neighboring counties represented by the Greater Gateway Association of Realtors, closings jumped 14.4 percent but median prices dipped slightly, from $115,000 to $111,900.
Days on the market, a key determinate on the direction of housing, improved. In Illinois, they dropped from 99 days to 80. In Metro East, they dropped from 149 to 144.
Realtors who have been hoping for a sustained, positive glimmer since the recession are upbeat.
“2013 continued the trend of increasing home sales and proved to be a progressive year for the housing market,” Tialdo said. “We are excited to see what 2014 will bring to our area.”
Al Suguitan, the president and chief operating officer for Greater Gateway, which covers Bond, Calhoun, Fayette, Jersey, Madison, Macoupin, Montgomery and St. Clair counties, is more guarded in his response but admiring of the numbers nonetheless.
“Overall, while the numbers may not show great leaps and bounds, housing activity is moving in the right direction,” he said.

Even as they were relishing the past year’s improvements, agents were bemoaning Mother Nature, which has been disastrous of late, causing statewide home sales to dip 7.5 percent comparing January in 2013 and 2014. However, median home prices climbed 9.6 percent over previous-year levels, according to the Illinois Association of Realtors.
Statewide, home sales (including single-family homes and condominiums) in January 2014 totaled 7,997 homes sold, down from 8,650 in January 2013. The number of houses on the market in January was down 19.9 percent compared to a year earlier, dropping from 70,254 homes for sale in January 2013 to 56,275 this year.
“Severe winter weather and seasonal trends definitely affected sales in January,” said Phil Chiles, president of the Illinois Association of Realtors.  “Despite diminished traffic from buyers, prices remained robust and indications are that they will continue to show strength as we enter the spring selling season.”
Janet Yellen, the new chairman of the Federal Reserve, said recently that housing has “good fundamentals” and in spite of rising mortgage rates is expected to improve in 2014.
Many industry observers say housing is a beneficiary of job growth, and in Illinois there has been four consecutive years of it, although the job count has still not regained the level of 2008 — just before the recession’s start.
Even though mortgage rates have fallen for the last several weeks, the National Association of Realtors says mortgage rates are starting to climb again, but are still well below August 2011 levels.
Pent-up demand should continue to drive the housing market.  Many investors and home buyers and sellers have been waiting to see what would happen in housing, and with interest rates beginning to rise, many will start buying and selling in 2014.
The National Association of Realtors Chief Economist Lawrence Yun says “the vast majority of homeowners have seen significant gains in equity the past two years, which is helping the economy through increased consumer spending.”
NAR reported median home sales prices were up 11.5 percent over 2012.
“This is a classic case of supply and demand,” Chiles, president of the Illinois association, said recently. “The low number of homes on the market is forcing consumers, who very much want to buy, to pay a bit more. What’s important to note is that there’s still a lot of interest in purchasing a home despite the lower selection.”
Nationally, existing homes sales for 2013 were the highest since 2006.  The increase in 2013 was 9.1 percent higher than in 2012, which is hopeful for everybody, industry observers say.
“As Warren Buffet says, our economy is based on the housing market,” said Deb Treat Frazier, the association executive for Realtor Association of Southwestern Illinois.
She pointed out that the association in February held another Housing Fair to help people better understand the process of buying and selling homes.