EDWARDSVILLE — A lawyer is moving forward on plans to build a fivestory building that could become one of the tallest in the city.
The terrain on the southwest corner of East Park and South Buchanan streets will appear vastly different in coming months with planned demolition of the former McClean Auto Repair as well as two neighboring houses.
The redevelopment project, called the Park Street Plaza LLC, has been proposed by Chris Byron, managing partner at the Edwardsville firm of Byron, Carlson, Petri and Kalb.
Several moves are being contemplated in the neighborhood as the developer seeks to build the 40,000-square-foot structure and enough parking space for what could be up to 50 to 90 people to occupy the building.
Although no tenants have been announced, the first floor will be made up of retail and restaurant space, with the other four floors being office space.
An authorizing resolution regarding use of TIF funds was approved in November on a 5-2 vote of the City Council. The site is just within Tax Increment Financing District 2, which covers the downtown core. As part of the agreement, the developer has requested $250,000 in TIF funds, City Administrator Tim Harr said.
Of the $250,000 being requested, $100,000 is being used to pay a deductible for the Illinois Environmental Protection Agency for remediation and cleanup of the site. Another $125,000 will go toward house and building demolition. Another $25,000 is also going for the construction of new sidewalks and streetscape. 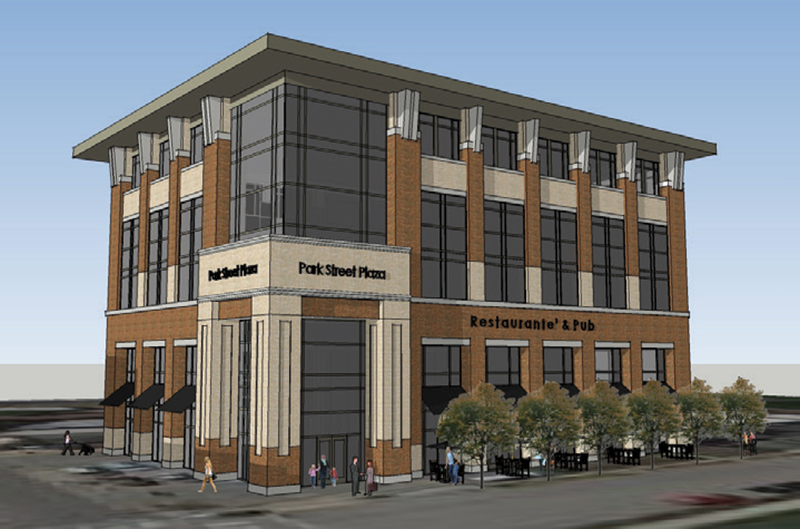 Total cost of the project is approximately $9.6 million.
Although the project will still have to go through the building permit phase, including submission of plans, it is on track to be completed by the end of 2015, Byron said earlier.
Speculation has centered on whether Madison Mutual Insurance Co. would become a tenant. Byron did not return a call seeking comment, but Harr said he talked to Madison Mutual about the speculation and was told nothing had been decided.
A representative of the insurance company told the Illinois Business Journal that the company’s current headquarters location and surrounding
24 acres are officially for sale and that many options for moving are on the table. He did not want to go on the record regarding any options.
“We’d have to sell our property first,” Madison Mutual President Mike Wenos said. “If this comes to fruition we’ll move from the property. We’re working through the next step. It might be six months to a year — maybe two years — before this comes to pass.”
The property is located along Illinois Route 157 and south of Governors’ Parkway. The acreage is prime ground being marketed by NAI DESCO.
The Byron project faced opposition during council deliberations. Some people have voiced criticism that the height of the building will conflict with the surroundings, although in reality it will not be too much taller than the building on the opposite side of Buchanan, which includes the 1818 Chop House.
“The one across the street, the Joe Meyers’ building, is a story and a half shorter. Will this look out of character? I don’t know. I think it will blend in eventually,” Harr said.
Harr pointed out that the design being floated looks more like a three-story structure because of tall window panes that are part of the design.
“It kind of hides the real number of floors in there,” he said.
The building would stand an estimated 71 feet tall, Harr said. By contrast, the HeplerBroom law office building on Main Street, which Byron also built, is 63 feet tall.

Byron has told the city he wants to add a parking lot with 70 to 75 spaces on another property he owns to the rear of the city’s Public Works offices (the
former Clover Leaf Bank site at 200 E. Park St.). A house on that site, which faces Kansas Street, would have to be razed. Parking made available then would butt up against the back parking area of Public Works.
That would provide a combined private/ public parking area that could also be useful for events at nearby City Park, which is across Park Street from Public Works, Harr said.
“Because this is zoned as B-1, part of the downtown business district, the zoning ordinances don’t actually require them to provide parking if they are within so many feet of a public parking lot,” Harr said. “But he recognizes that he is going to need a lot more space for parking.”
Harr said there has also been discussion of Byron leasing additional parking along Kansas Street, near Schwartz Street, about a block south.

More on horizon
The Park Street Plaza project is one of several things on Edwardsville’s agenda this year.
Harr said the city will continue to move ahead on plans for a new public safety building on the site of the former Madison County Sheltered Care. It would
serve as the central location of both police and fire departments. Many funding options are now being explored.
“The architects have put some preliminary numbers together with square footage and cost estimates. We’ve met I think three times now to try to pare that down. We (originally) anticipated that it would be in the $10 to $13 million range,” Harr said. Architects concluded that 44,000 square feet was going to be needed, but Harr said the final plan is likely to be closer to 35,000 square feet.
The challenge is to factor in space needs as the city continues to grow. More manpower and equipment are possible during the next 20 years, he said.
Plans are also in the works to pursue a satellite, two-bay fire station on the campus of Southern Illinois University Edwardsville, near the campus water tower. Such a facility would aid in the response time to calls as far west as the Gateway Commerce Center, Harr said. As it stands, that station, estimated at 5,300 square feet, could be done well ahead of the public safety facility.
Also on the horizon is a “splash park,” a water play area envisioned along West Schwarz Street, just west and on the same ground as where the city wants to build its new public safety facility. The city has obtained a $300,000 grant from the Metro East Parks and Recreation District and is hopeful of getting another large grant from the state. At the very least, Harr said, some kind of park will be built in that location.