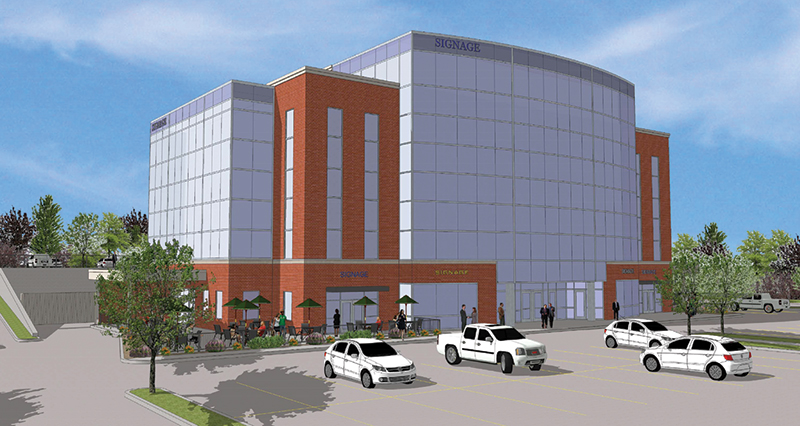 COLUMBIA — Work may begin by year’s end on a professional and medical building that could become part of a $50 million, multi-building campus during the next several years, if the economy allows.
The first building, worth an estimated $13 million, will rise on 21.6 acres of land on the bluff overlooking Illinois Route 3 and Interstate 255. The site is the former Hermann family property, along Sand Bank Road and across from the Luhr Brothers Inc. contracting operation.
The site is to be called Columbia Professional Center. The first building is being developed as a 50-50 partnership between well-known local developer Joe Koppeis and a group of local medical professionals.
The partnership name is officially called Columbia Land Management LLC.
The medical investors are part of a doctors group that wants to expand its practice in Columbia, where it now has only a small satellite office. Doctors will be located on the first two floors of the new building.
The medical partnership involves only the first building to be constructed, Koppeis said. That will be a five-story, 60,000-square-foot structure that is about 50 percent leased — before a single footing has been poured.
“The first two and a half floors will all be medical-related, and we plan a restaurant and physical therapy
(office) on the lower level,” Koppeis said.
The fourth floor is not yet leased — some 14,000 square feet. Half the third floor is still available, as is about 5,000 square feet on the fifth floor.
“We think as the building is coming out of the ground it will get some attention,” Koppeis said. “We hope to still break ground this year. We moved in a construction trailer (in mid-November). We cleared out some trees and we’re ready to start grading.” The recent snow set back the project just a bit, he said.

The architect on the project is Mike Schneider of Quadrant Design Architects and Planners in Waterloo.
An annexation agreement is now underway between the partnership and the city of Columbia.
The site plan drawings are being reviewed by the city, which had already signed off on the preliminary plans.
“We don’t anticipate problems with the site,” Koppeis said.
It should take 1.5 years to build the first building, he said.
“It’s going to be unique to this area. The nicest building to be built in our area — period.”
For Koppeis, that’s saying something. Admiral Parkway Inc., an umbrella commercial real estate development company owned by Koppeis and his wife, was developer of the Falls Community Center, the Rock City development and other notable projects in and near Columbia.
The building exterior will feature “curtain wall glass,” instead of brick. The glass is a more costly option, he said.
“Because of the energy code, you’re actually having to build a wall inside a wall to meet the energy requirements.  But I think it’s the look that the hillside deserves.” he said. The structure will be one of the first things motorists will see as they enter Columbia from the north.
“It’s a phenomenal location in terms of visibility and accessibility,” he said. The downtown St. Louis skyline can be easily seen from the site on a clear day.
Koppeis said he actually tried to buy the property several years ago to build an office complex, but couldn’t agree on a price. Later, one of the medical investors, who was also interested in the land, contacted him about entering a partnership, and jointly they purchased the property about a year ago.
The first building will be constructed on the hill’s highest elevation. The three other buildings would be constructed so as not to block the view of the first building.
“We’ll build them one at a time. If the market allows, we’ll go to the next one and keep going,” Koppeis said. “(The market) is much better now. People don’t seem to be afraid, or as afraid. Most of the foreclosures and distressed properties have all been sold and liquidated, and that makes a  tremendous difference.”
Koppeis said another partnership entity would likely be formed to construct buildings two, three and four.
The developer believes the doctors’ are making a wise decision by investing in Columbia, where they have a small practice now. The decision will keep some residents from heading to St. Louis for medical services.
“I think it’s going to protect their market share for years to come,” he said.