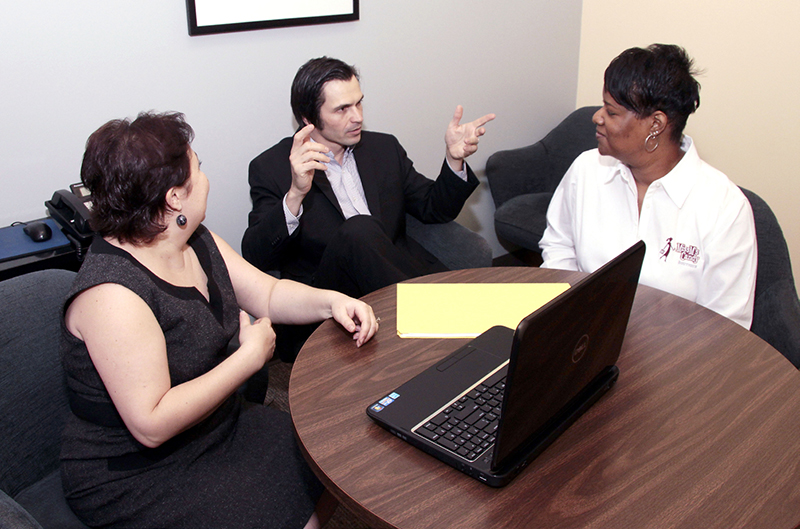 GRANITE CITY — The nation’s second-largest SBA microlender and one of its strongest advocates for first-time homebuyers is looking to expand its footprint in Metro East to assist more people in building their dreams.
The Justine Petersen organization, which recently opened an office in Granite City as a complement to its longtime operations based in St. Louis, has a dedicated loan pool for businesses located in Madison and St. Clair counties through a partnership with Bank of Edwardsville.
While the goals are pretty simple, the methods to achieve them are fraught with challenges, especially for potential clients not used to dealing with banks and governments. Justine Petersen, named for a woman who spent much of her life developing special mortgages for first-time homebuyers in the St. Louis area, has been cutting through red tape for the past 18 years.
Housing is one of three focuses of the agency, including first-time homeownership,  refinancing and loan modification. And housing is not Justine Petersen’s primary focus.
“Microlending is,” said Galen Gondolfi, chief communication officer. “We’re the nation’s second-largest microlender for the Small Business Administration. For both business and consumer lending. We’re now dipping our toe into consumer lending.”
The third major focus “is credit building, and it permeates all that we do,” Gondolfi said. “When we’re talking to a client about buying a home, be it home prep or refinancing, it’s all about restoring the credit score. We do a lot of credit-building activity. It’s part of a national movement advanced by Credit Builders Alliance, which seeks to enlist microfinance organizations like Justine Petersen to support this idea of building credit scores.”
The agency’s “big message” stresses good credit as a solid foundation for just about everything.

ALTON — WellSpring Resources has welcomed a new director of development to its fund-raising team.
Lura January will oversee the agency’s development team and functions, including fund-raising, marketing and public relations.
January earned her bachelor’s degree in psychology and biology from Loyola University Chicago.  She has also worked as a fund-raising professional for the United Way of Greater St. Louis and the Gateway Area Chapter of the National Multiple Sclerosis Society.

Right email approach may be the link to your next customer

Snapshot of the Local Economy

Plight of Gen X’ers affecting all of economy, experts say