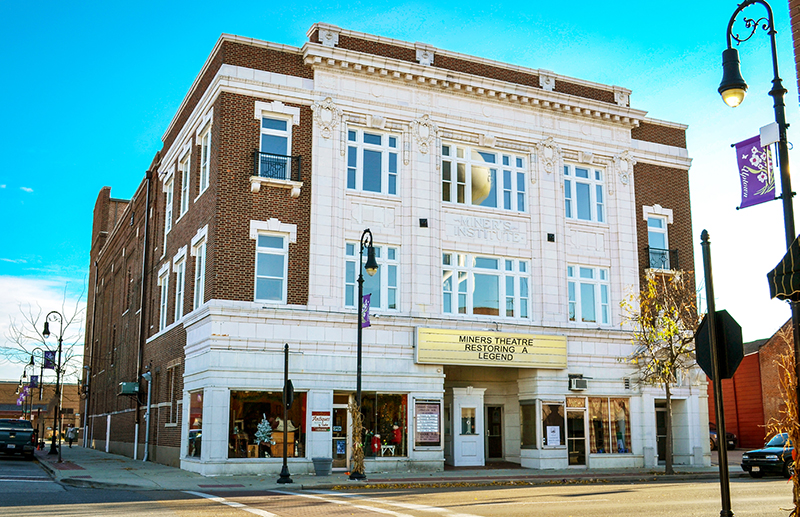 COLLINSVILLE — One hundred years ago, coal was king in Collinsville, and the miners were the loyal subjects who pulled it out of the ground.
The tunnels were everywhere.
“You could walk from one side of the city to the other, in the coal mines,” Leah Joyce said.
It was hard and dirty work, and the sweat and toil gave rise to the need for recreation.
“So, in 1916, one of the miners convinced his fellow coworkers that a public theater and a union hall should be built,” Joyce said. “They went to the locals and got them to agree to build the theater. Each coal miner gave 1 percent of his meager coal mining salary to fund the building.”
Two years later, the doors to the Miner’s Theatre opened, and a future landmark was in the making. Now, nearly a century removed, Joyce is heading up an effort to restore the theater to its glory days, in time for its 100th birthday in December 2018. The labor of love is going to take labor to help get it done.
The theater is formally known as the Miner’s Institute and is so labeled on the terra cotta cap on the front of the building, located at 204 W. Main St. For most people who’ve passed through the doors, the structure is simply Miner’s Theatre.
The facility has played witness to much of the cultural development of Collinsville and today serves as an anchor of the Uptown area. Joyce is well suited to her role. She is coordinator of Uptown Collinsville for the city and is president of the Miner’s Institute Foundation, the latter a volunteer position.
Miner’s Theatre has played host to union gatherings, high school plays, graduations, movies, performing arts productions, vaudeville and operas.

“On the second floor were union offices; the building was also a labor temple,” Joyce said.
The third floor of the three-story structure was used by various community groups for social activities and housed a small library, which was the beginning of the present day Collinsville Memorial Public Library.
Sadly, the theater followed the fate of the local mining industry, which reached its heyday in the 1930s when the mines began closing.
In 1969 Bloomer Amusement Co. bought the building and ran it as a movie house until the 1980s when — in the face of multiplexes and video rental competition — it closed.
Recognizing a situation that appeared dire, the Collinsville Jaycees stepped up.
“They knew it needed to be saved and got it listed on the National Register of Historic Places in 1985,” she said.
Around that time a group of local citizens formed the nonprofit Miner’s Institute Foundation. They raised the money to purchase the building in 1989 and did a lot of restoration. They operated the theater successfully for several years, renting out space for various efforts. However, it closed again in 2008 and has remained closed since.
“We cannot reopen it until we do certain renovations to make the structure compliant with current building and life safety codes as well as the Americans with Disabilities Act (ADA). Today, in an assembly use like this and of this size, you’re required to have a voice evacuation fire alarm system. That’s something that’s never been required in the past and it’s significant, about $105,000,” Joyce said. Restrooms must be made ADA accessible, as must the stage. A new HVAC system is also needed as is an electrical upgrade.
“Other than that it’s pretty much just cosmetic,” she said. 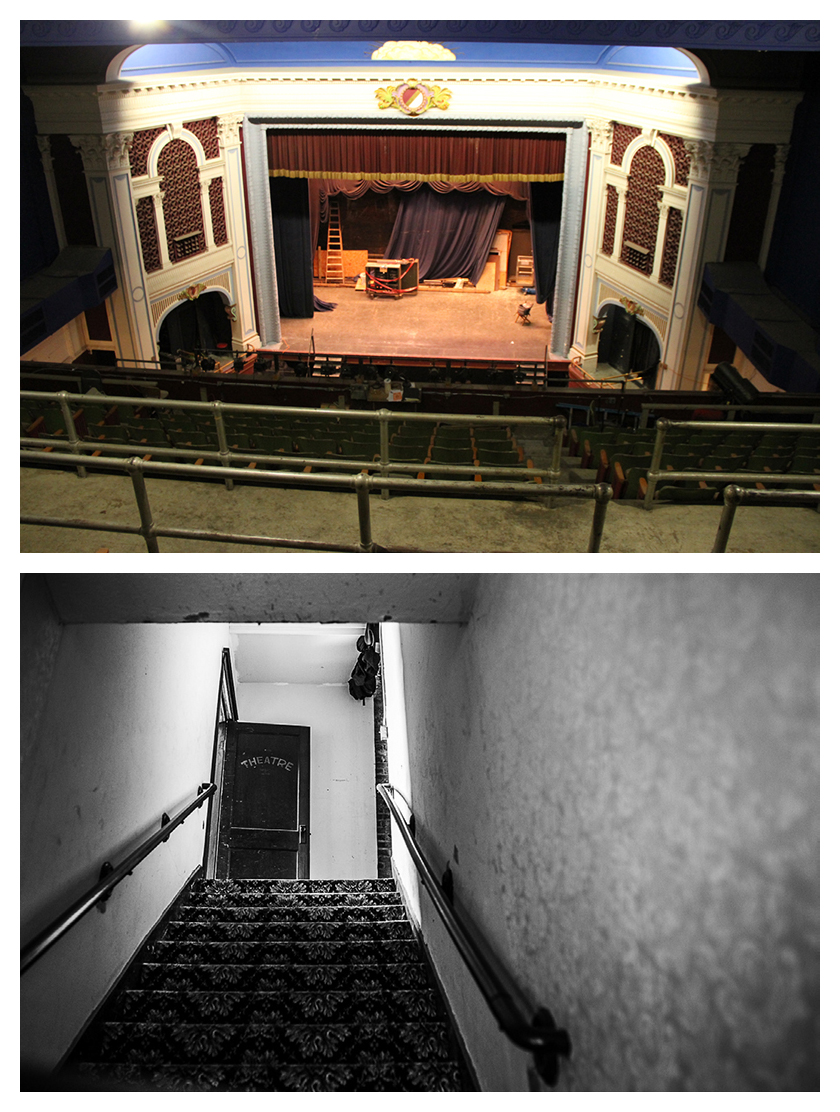 A campaign to install new seats took place several years ago. Since then, a new sprinkler system was installed and a new roof put on.
Collinsville Progress, the community development arm of the local chamber of commerce, last month committed $6,000 toward resurfacing and raising the stage by 4 inches to accommodate use of the dressing rooms and restrooms in the wings by someone in a wheelchair. The project will also include the construction of a ramp from the stage to the auditorium, another ADA compliance measure.
“They’ve donated the money for the foundation to buy the materials, and the Collinsville Area Vocational Center is going to do the work,” Joyce said.
The foundation also received a $6,100 grant from the Boeing Employees Community Fund, which will go toward buying new code-compliant exit and egress signs and lighting.
The latest campaign to restore the theater began about a year and a half ago.
“We started by re-branding with a new logo, website, social media platforms and marketing materials. Then, we expanded the board of directors (to 14 people). We also have a committee of 17 and volunteer base of 100-plus. When we reorganized the foundation, we looked at it like the Italian Fest,” she said, referencing the popular annual community event that relies on hundreds of volunteers and many organizations for assistance.
People have responded. A missions group from Shawnee, Kan., for instance, organized a recent cleanup of the stage. And Collinsville Progress held a fund-raising scavenger hunt on Nov. 1.
Joyce said Collinsville Progress viewed its recent, $6,000 donation as a call to other community organizations to get involved. The day after learning about Progress’ donation, a member of the community came into Joyce’s office and donated another $4,000.
“We’re a year and a half in since the board reorganized and began this campaign, and we’ve received over $50,000 in cash and in-kind donations,” she said.
About “half a million dollars” in work is needed.
“That would take care of opening the theater,” Joyce said. “The renovation of the second and third floors (for rentable meeting space) are separate phases. We’ll have to have an elevator. That’s another $100,000.”
The architect on the work is White & Borgognoni of Carbondale, which specializes in restoration of historic buildings and performing arts venues.
The current cost estimate of the first phase is $487,000, but the foundation believes it can significantly lower that amount through donated labor.
“The Collinsville Area Vocational Center can do a lot of work but not a lot of the specialized work. So, we are seeking the local labor unions to come and do the specialized work,” Joyce said. “The vocational center work is so important, but we’ll also need electricians, plumbers, plasterers, carpenters … .”
The seating capacity is more than 800, which is far fewer than the original theater, which held more than 1,000, smaller seats.
Curtain’s Up Theater Company, a local company that does not have its own home, has members on the Institute board, and Joyce hopes to establish a long-term alliance with them, as the theater progresses.
That’s just one of many partnerships she hopes to forge.
Supporters have been loyal — some since they were children.
Mick Gnavi, a founding member of the Miner’s Institute Foundation, recalls hearing the stories of ghosts seen in and around the theater. One of them is supposedly a miner who posed for the statue outside the building — upset because another miner, his cousin, got all the credit for being the model.
Another of the ghosts is supposedly a woman pushed from a catwalk. Still another is said to be the ghost of a builder who fell from scaffolding. No one’s offered any proof but the tales make for good theater.
It is spooky when you’re in the building alone, Gnavi admits.
“When we first bought the building in ‘89, it leaked horribly. Me and another gentleman used to take turns every time it  rained and come up here at night, alone, and go up the steps into the balcony and dump 55-gallon drums of water that we had collecting,” he said, pausing for effect. “You had to suck it up — it was scary. But I never saw anything.”
The building was rededicated in 1993 when it was named a Collinsville Progress Historic Landmark and a City of Collinsville Historic Landmark in 2013.
Joyce said a number of contributions to the campaign are expected to be announced after the first of the year. Anyone wanting more information on the restoration efforts or who would like to contribute may visit www.historicminersinstitute.org, follow the foundation on Facebook/Miner’s Theatre or contact (618) 972-4236 or MinersInstitute@gmail.com.

Utility customers may get breather again this year, Ameren says