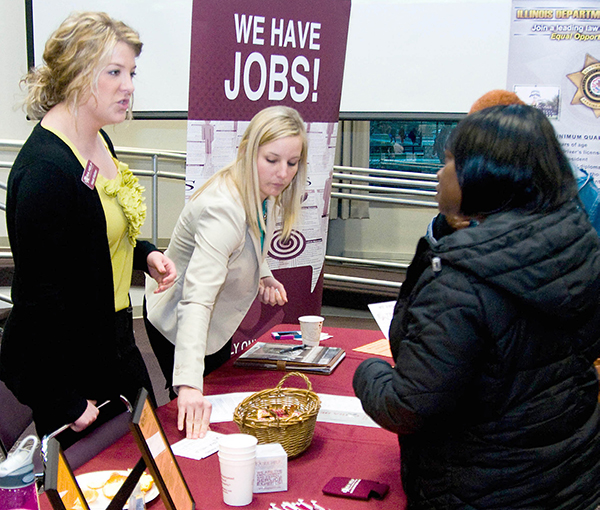 Dury Estes stood out among others walking the aisles at a recent college job fair. Outfitted in a nice suit coat, tie and slacks, he looked dressed for success — and was hoping to find it.
Ever since he was “let go” at a medical records facility he’s had a rough four and a half months, searching for the next job.
“I’ve got a folder full of rejections,” said the Wood River man. “I’ve probably applied to about 40 places.”
But he said he’s not to be discouraged. Things have picked up lately with three interviews.
“I’m making a job out of getting a job,” he said, quoting from an old saw.
Estes, who is well past his school years, was among a sea of people in attendance at an April Career Fair sponsored by Lewis and Clark Community College in Godfrey.
Many of those present were college students, hoping to latch on to something after graduation. Others were people well into their prime, hoping to regain something they had lost or to grab on to something new, and better. They represented an amalgam of those looking for work after the recession of the last few years.
“I’ve got a job, but I’m just getting by,” said one man, who declined to give his name for fear of alerting his current boss. “I don’t want to just get by; I want to live.”
Job seekers, particularly those now coming out of college, may be in for some good news. The markets are easing up, and some places are hiring. Many employers say they have jobs now ready to be filled — in some cases, really good jobs.
The Federal Bureau of Prisons, which is not high on many occupational lists, is about to see a surge of hirings in Illinois, said Kurt Neudeck, a counselor in Unit Management at FCI Greenville, the federal correctional center in Bond County. Because that facility is turning 20 years old, a number of its workers who have been there from the beginning are eligible for retirement. That’s opening up jobs in a number of professions, not just guards.

And, with the federal government’s purchase of the Thomson (Ill.) Correctional Center from the state of Illinois, several hundred jobs are anticipated there when it reopens. The Department of Justice’s Bureau of Prisons has committed $53.7 million in funding to the activation of the prison. Some $10 million is designated for renovation while $43.7 million will be used for staffing and equipment purchases and upgrades. The full activation of Thomson prison is expected to take two years.
The prison system has locations nationwide with hiring needs.
“If you’re mobile, it helps,” Neudeck said. “You might go to one of the other 115 facilities, work a year and then transfer back, closer to home.”
The system will often pay for people to move and it offers a veteran’s hiring preference, he said.
The U.S. Army National Guard is also looking for workers — and younger ones, said Sgt. First Class Brian Piper, who handles recruitment in an area from Alton to Greene County. The Army recently reduced the age criteria for reserve acceptance from 42 to 35. And while the Army in general is trimming its reserve ranks, Illinois has been less affected than most states, he said.
The Guard offers a “6×2” contract that is quite attractive to those seeking a college degree. Guard members commit to six years of giving up one weekend a month of uniform service and two years of being placed on Inactive Ready Reserve, in which their name is part of a database for call-ups.
In return, Guard members get 100 percent college tuition paid for four years and qualify for benefits under the G.I. Bill. Plus, they get full health-care coverage.
“That’s been a huge draw for people,” Piper said.
Sandy Ramage, community relations representative for the area’s 1st MidAmerica Credit Union chain, said her company offers the potential to grow in its 11 locations and tells prospects that. She started off as a teller just a couple of years ago.
“If you’re looking to get your foot in the door, you can move about this company quickly and easily,” she said. “You can start putting into a 401 (k) even as a part-time teller.”
The company is in the processing of absorbing the former Laclede Community Credit Union, she said.
FedEx Corp., which is opening a FedEx Ground facility in Sauget Business Park later this year, is also looking for workers, both package handlers for that location and truck drivers for some of its other Illinois sites, a representative said. The drivers are employed through Kelly Services. Workers can find info on line under “watchasort.com”.
Godfrey-based Cope Plastics has immediate needs for machinists, sales people and others, said Dan Coffman, who worked for years as a product fabricator on the floor of the Godfrey location before eventually landing a role as trainer and safety director at a business that employs 350 people across 17 locations.
“We’re looking for people willing to learn,” he said. What he’s learned lately is that there are more qualified prospective employees than ever.
Cope offers has an “on call” program that allows people a chance to show their abilities before they’re actually hired. Some 70 percent of those who are tested in this way are found to be worthwhile, he said.
Coffman has some advice for job seekers:
“Do your research. Know what you’re looking for. Don’t just come in and say you’re looking for anything, because ‘anything’ is not a job.”
Farmers Insurance, the third-largest property and casualty company in the United States, has a growing presence in Illinois, said Liz Corey, a recruiter for District 61, which covers the southern Illinois market. It’s looking for sales and marketing representatives. The company offers a flexible schedule for its workers, which is a plus.
“But we’re also very selective. We’re looking for leaders in their community. Someone who is the right fit for us. Potential managers.”
She added: “Security and family — that’s what we’re all about.”
Alice Bunjan, manager of Lewis and Clark Community College Career and Employment Services, said her office since 2009 has seen a surge of laid-off workers, many of whom hadn’t filled out an application for 20 or more years and need help.
“We can upgrade their skills and make them marketable,” she said. “Networking — that’s the place to start.”
Her office works in partnership with job agencies throughout the region, she said.
This year may be the year of the new job. According to a recent study conducted by the Hay Group, an international management consultant, employee turnover is expected to accelerate in 2014 with the number of workers taking flight predicted to reach 161.7 million in 2014 – a 12.9 percent increase compared to 2012. The average employee turnover rate over the next five years is additionally expected to rise from 20.6 percent to 23.4 percent.
If you’re looking for a job, here are some helpful sources:
– LCCC’s Office of Career and Employment Services, (618) 468-5500 or lc.edu/Career
– Illinois WorkNet, www.illinoisworknet.com
– Madison County Employment and Training, http://www.mcetd.org/

10 Skills Being Sought By Employers

Citing various sources, the office of Career and Employment Services at Lewis and Clark Community College said employers are looking for these skills: