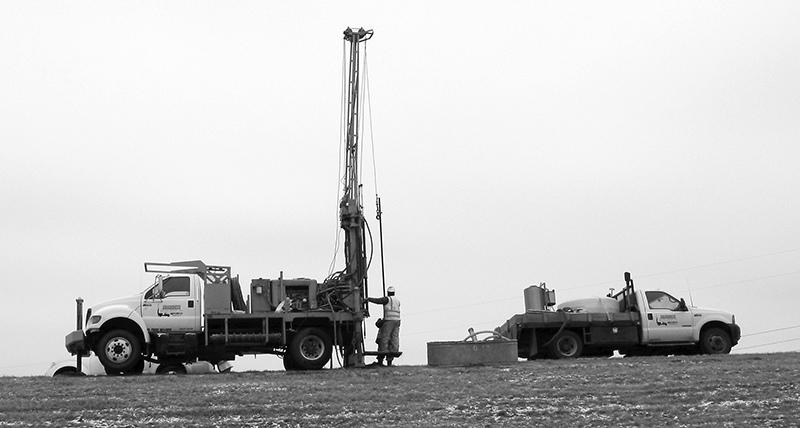 After traveling some bumpy road with the U.S. Corps of Engineers, Jon Omvig, the St. Louis office manager for AMEC, reports that things have smoothed out.
“The 408 process was not anticipated when we started the project and it added a wrinkle to the process,” Omvig said. “It clearly added some review time to the schedule that we hadn’t anticipated, and I think it added some costs to the flood protection district.”
The 408 review process is Section 33 USC (United States Code) 408 of the Rivers and Harbors Act of 1899 which was amended in 1985. This gives the Corps the authority to review any proposed changes to levees and determine if those changes would reduce their effectiveness. It can be an intense process, requiring multiple levels of review by a multitude of people in multiple locations around the country.
Omvig says on each bid package, AMEC prepares for levee improvements and the Corps reviews the plans and specifications to ensure there is no injury to the current levee. All bid packages go through the 408 process. The local Corps staff determines whether the proposed changes are major or minor. Minor improvements undergo local review at the St. Louis District level. Major improvements have to go to the division headquarters in Vicksburg, Miss., and ultimately to the USACE command in Wash. D.C.
“In each bid package that we submit to the Corps,” Omvig said, “there’s an application section that pertains to real estate, one for environmental and another for the actual construction plans. The Corps assembles a review team. They review the package, give us their comments, and we respond to the comments. Once we come to resolution, we then revise our plans and specifications, resubmit the package and then the Corps will issue the 408 approval.”
Omvig says AMEC received some good news recently from the Corps. While AMEC’s engineers were finalizing work on the design of cut-off walls in the Alton-Wood River area, the Corps announced that it had funding sufficient to not only do the design of the walls itself but carry out the construction as well. With some walls reaching nearly 140 feet deep down to bedrock, that news was a major coup for the Southwestern Illinois Flood Prevention District Council, saving a lot of money and taking a large task off its plate.
“If the Corps does it, the council’s portion of funding, I believe, is 35 percent,” said Omvig. ”They effectively get 65 percent of the project funded by the Corps of Engineers and save all the time associated with getting the 408 permit.”
Some construction work has begun on the south end of the system in the Prairie DuPont Levee and Sanitary District and Fish Lake Levee and Drainage Districts, Omvig says. “It was a fairly small package,” he said, “but it provided a kind of dress rehearsal for the 408 process.” Two more packages have been approved by the Corps and are in the process of receiving bid approvals from Madison, St. Clair and Monroe counties.
“The Corps of Engineers has identified the need for cut-off walls in the Metro East Sanitary District – roughly from the Sauget area south to the south end of the MESD (Metro East Sanitary District) levee near Dupo,” Omvig said. “Here again, this is an area that needs improvement for the 100 -year level of protection as well, and there is some potential for the Corps to get its project designed and constructed first.”
Omvig says the entire project will consist of six bid packages that will be submitted to the Corps plus the projects that the Corps is completing itself. The Corps has already approved three of the packages, he says, and AMEC’s engineers are currently working with the Corps on the other three. Changes to the design will have to be made, he adds, but he does not expect them to be significant.
“I think everyone has indicated a tempered sense of optimism,” Omvig said. “We can see light at the end of the tunnel. I would say it’s a testament to the Flood Prevention District Council and Les (Sterman) and to the (Southwestern Illinois) Leadership Council. I think the Corps has done these reviews faster on this project than they typically would have. I think they’ve worked well as a partner.”

Kendall Canfield has joined HeplerBroom LLC in the St. Louis office as an associate attorney.