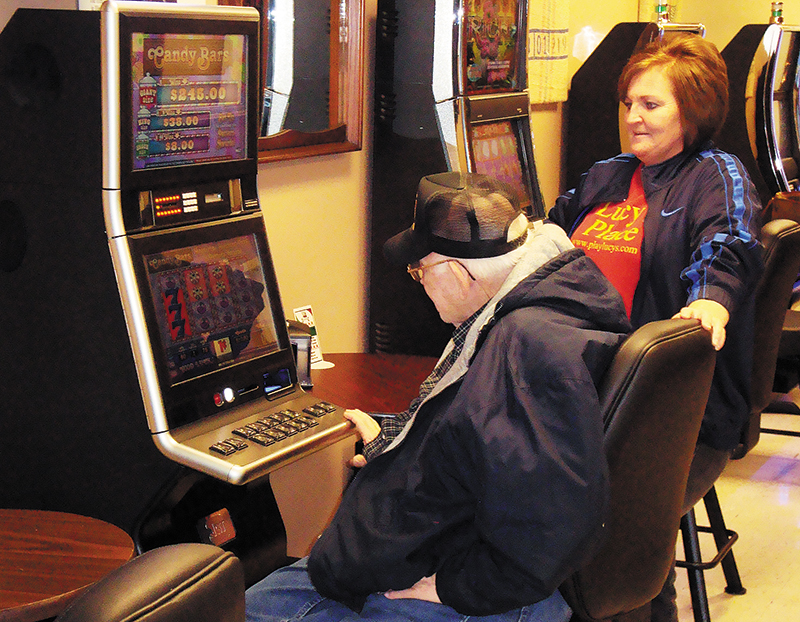 It was a quiet, wintry afternoon outside the building, but inside Lucy’s Place, the action was hot, with every slot machine occupied and alive with the sounds of winners and losers.
Yet, this is no casino. A year ago, it was a coffee shop before the operator agreed to sell her equipment to a group of businessmen who leased the building, then took months turning it into a tiny video gaming parlor, lovingly named after one of the owner’s dogs. The coffee shop operator stayed on as a manager.
The location on Vaughn Road in Wood River houses only the maximum, state-allowed five gaming machines, but it made a nifty $32,246 in net wagering activity between May and the end of November, its first months of operation. The location is among 20 Lucy’s Places in Illinois and in turn they are among the latest in a long list of sites that opened in the state after last year’s launch of video gambling for bars, restaurants, fraternal organizations, truck stops and other sites.
Scores of similar establishments  have sprung up this past year in Metro East, providing fierce competition to big casinos like Argosy in Alton and the Casino Queen in East St. Louis.
In October, when there were 140 licensed video operations in Madison and St. Clair counties, those outlets saw net wagering activity of just under $1.5 million for the month, according to Illinois Gaming Board reports. (Another 12 establishments came aboard in the two-county area the following month.) Net wagering is the amount played by gamblers minus the amount that they won. The net is split among host retailers like Lucy’s Place, the state and city governments and the terminal operators.
Statewide, such video parlors saw $35.95 million in net wagering activity in November, the Gaming Board said, and the figure has increased every month since video gaming began in October 2012  with only 65 licensees.
Since then, licensed and operating establishments have grown to approximately 2,830 — 97 pages’ worth of entries on the Gaming Board website, which is updated monthly.
Hundreds more locations have been authorized but are not yet operational, and at press time there were 95 more applications pending for licenses in Madison and St. Clair counties. However, a spokesman for the Gaming Board said the number of new license applications recently dropped and appears to be leveling off.
The small-scale action appears to have affected the bottom line of casinos  throughout the state, all of which reported decreased adjusted gross revenue in their latest year-to-date reports. For Argosy, the number was down $5.32 million, or 9.34 percent. For the Casino Queen, the decline was $4.89 million, or 4.98 percent.
The month-to-month comparison was also stark. Argosy was down 13.3 percent from November 2012 to November 2103. Casino Queen was off 1.8 percent. In fact, every casino in the state was down, with the exception of the newest casino, Des Plaines Rivers Casino in suburban Chicago, which opened in 2011 and was up 11 percent in the month-to-month.

The executive director of the Illinois Casino Gaming Association is clear about the effective of video gaming on the state’s casinos.
“It’s having significantly more impact than we had anticipated. Our revenues are down for the last year and not much has changed other than video gaming,” Tom Swoik said.
There are now more video games authorized at video gaming parlors in Illinois than are authorized at all 10 of the state’s casinos.
“We’re limited by law to 12,000 gaming positions. There are now 12,113 machines out there (in video parlors) as of November,” Swoik said.
Under the law, the state of Illinois gets 30 percent of the net wagering amount, 5 percent of which is forwarded to the host municipality. Another 0.7275 percent is paid to Scientific Games, the company that built and maintains the computer-monitoring system that tracks all gambling activity. The remaining money is split evenly between the retailer and the terminal operator, who are separately licensed entities. The law allows towns and counties to tack on certain fees.
Lucy’s Place is one of a chain of 20 similar locations spread from Springfield south to Harrisburg, said Michael Brumleve, the Springfield regional manager.
The principal owners are Matt Hortenstine, a lawyer from Effingham, and Chris Stone, a lobbyist from Springfield who heads the company.
The pair modeled their neighborhood video-gaming concept on sites they visited in West Virginia, which has about a decade as a video gambling state under its belt.
In Metro East there are Lucy’s Place locations in Alton, Columbia, Troy and Wood River.
There is a plan to expand, Brumleve said, but the owners first want to know how the initial 20 sites are doing.
“The main thing was getting these first 20 up and running. They wanted to expand to 30 or 40, but they quickly realized it’s a lot of money to push to get these open,” Brumleve said.
The process is a cumbersome one. In Wood River, it took the owners about four months to get the lease, do the build-out, acquire the liquor license and get the gaming application into the state. From there the state took another four to six months approving the license.
In mid-December, the business got a nice sign on the building. The location is on one end of a small strip center. Even without signage, people were finding their way in.
“Mostly it’s repeat customers. They range from people who like to come in every day to a mostly weekly kind of thing,” Brumleve said.
“We just started a radio ad campaign (in December). We found out that a lot of people when they would come in … would say they were just driving by and they saw us.”
Each Lucy’s location has about five to six employees. The hours of each location are generally 8 a.m. to midnight and coincide with the time allowed by the terms of the liquor license.
“First you have to get the lease on your location, which is needed before the applicant can get a local and state liquor license. Then you have to get the gaming license. Which is why a lot of the bars were the first ones to get (gaming licenses) because they already had all that stuff,” Brumleve said. “They could just go straight for the gaming licenses.”
Five machines is the maximum allowed, although many of the machines have multiple games each and can be played for various denominations of coins, from penny slots on up.
The businesses do not own the machines, which are provided by a terminal operator that handles the money.
“It’s kind of a balance of power thing,” Brumleve said.
The Illinois Casino Gaming Association plans to reapproach the legislature about its new competition, Swoik said. Video gambling halls do not have the same restrictions when it comes to self-exclusion lists and hours of operation.
A self-exclusion list is made up of people who have asked to be banned from the state’s casinos, generally acknowledging themselves as problem gamblers.
“When we send promotions out, we can’t send them to those people. Some of these video gaming parlors are sending fliers through the mail and send them to everybody,” Swoik said.
Though they asked for round-the-clock operation and were defeated in the legislature, casinos, which can be open 22 hours a day, face more restrictive hours than truck stops, which can operate 24 hours, he said.
“We’ll be talking seriously about that in the next legislation session, to level the playing field in several areas,” Swoik said.
He notes that there is a revenue argument to be made by casinos since they pay a graduated tax of 15 percent to 50 percent.  Video gaming pays a 30 percent flat tax to Illinois. The larger video gaming gets, the harder it will be to generate revenue in the casinos and the less tax going to Illinois from casinos as a result, he said.
Swoik said his industry is hearing of interest from companies from out of state, wanting to move to Illinois. One of them is supposedly wanting to open some 150 video gaming parlors.
“There’s nothing in the law that would restrict them from doing that,” he said.
Race track slots are another concern, he said, although that proposal has so far not made it past the General Assembly.
“We think this is helping our argument on saturation and cannibalization,” Swoik said.