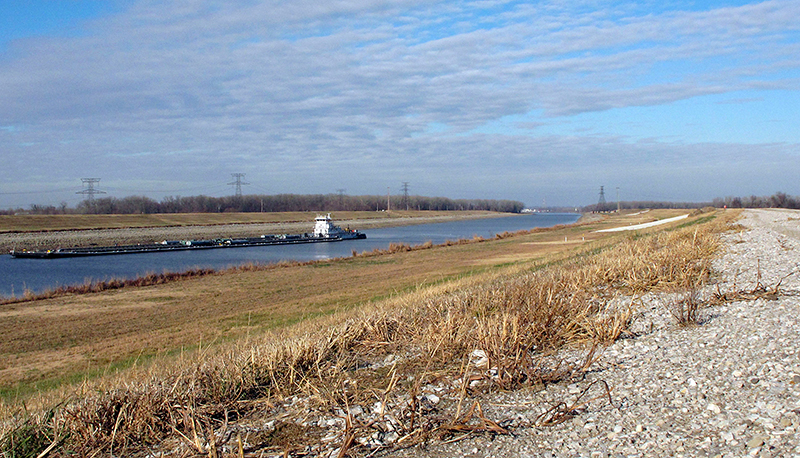 The local agency responsible for restoring Metro East levees may take back responsibility for a major project in that effort over the U.S. Army Corps of Engineers’ refusal to require a project labor agreement.
The Southwestern Illinois Flood Prevention District Council is overseeing repairs and upgrades to the 74-mile levee system that protects the American Bottom – the Mississippi River floodplain that stretches from Alton to Columbia in Madison, St. Clair and Monroe counties. The area is home to 156,000 people and businesses that employ 55,000 workers.
A quarter-cent sales tax collected in the three counties since 2009 is paying for the work, aimed at restoring the levee systems to 100-year flood protection by 2015.
The council has established a policy of using project labor agreements for the work. A PLA is a pre-hire agreement that sets out wages, benefits and working conditions for a particular construction project.
Les Sterman, chief supervisor for the council, said PLAs are used for nearly every big construction project in southwestern Illinois.
“It’s generally accepted as good practice here,” he said. “It’s not a partisan issue. It’s not a ‘big labor’ issue.”
Under a PLA, contractors, whether union or non-union, agree to its terms when they submit bids and unions agree not to strike for the duration of the job.
“(PLAs) have resulted in great stability in the workplace,” Sterman said. “They do not increase costs. They may even stimulate competition.”
All three contracts the council has already awarded are under PLAs and bids came in below estimates, Sterman said.
“We had a significant number of bids for each of those projects,” he said. “It’s local tax money (paying for the work). We want to support the local workforce.”
Sterman said PLAs are common in southwestern Illinois on projects large and small.
At issue is a project aimed at stopping underseepage of about 8,000 feet of existing levees in the Wood River Drainage and Levee District.
Sterman said the council’s consulting engineers completed designs in December for two cutoff walls to address the problem, but the Corps subsequently offered to take over the project.
Underseepage occurs when river water finds a path beneath a levee and erupts as a sand boil on the other side. Uncontrolled underseepage can cause levee failure. Although the Metro East levees protected the floodplain through the Great Flood of 1993, that and subsequent floods exposed numerous underseepage problems.
All levee projects are subject to Corps approval and Sterman said the Wood River project was subject to three levels of review by the Corps as well as outside peer review.
He said Corps officials expect to have enough money to take on the project in 2014 and told the council the Corps could do its own design and get it approved more quickly than the district’s design could be approved.
The deal offered funding advantages, too. Managed by the Corps, the project – which is expected to cost as much as $20 million — would be 65 percent federally funded and 35 percent locally funded, rather than 100 percent locally funded.
But the Corps has twice declined to use a PLA for the project.
“They concluded there was no benefit to the federal government,” Sterman said.
“The Corps cannot require a PLA,” said Mike Petersen, a spokesman for the Corps’ St. Louis District.
PLAs are typically not used on federal construction projects expected to cost less than $25,000 but the St. Louis District decided to consider the council’s request anyway, Petersen said. He said the Corps did market analyses, consulted experts and examined the history of construction work in the area.
“The research didn’t show a benefit from the federal perspective,” he said. “(The Corps has) done levee work in the Metro East for decades without PLAs.”
That decision attracted the attention of U.S. Sen. Dick Durbin (D-Ill.) and U.S. Rep. Bill Enyart (D-Belleville). In a letter, they strongly urged Assistant Secretary of the Army Jo-Ellen Darcy to include PLAs in any subsequent levee projects.
The letter called the decision “baffling to a community that has so strongly pursued this project.”
Durbin and Enyart had previously written to Darcy, citing an executive order of President Barack Obama in February 2009 encouraging the use of PLAs on federal construction projects.
Petersen said the Corps had reconsidered its decision but came to the same conclusion.
A recent edition of “Metro East Update,” an online publication of the Corps that follows the progress of the levee work, says the Corps “must ensure federal investment will deliver the best value to the nation.”
The posting also cites advice from the Deep Foundation Institute, a nonprofit technical association of experts in deep-foundation construction, that “the expertise and technical skill needed to construct deep cutoff walls would require considering a wider pool of expert contractors for this work.”
Petersen said prospective contractors may choose to submit PLA bid proposals but the Corps will not require that.
Sterman, in an Oct. 4 letter to Col. Christopher Hall, commander of the St. Louis District, again asked the Corps to reconsider the PLA decision.

Sterman said it became clear in a meeting with Corps personnel the day before that they were misinformed or misunderstood how PLAs work. Sterman said a PLA would not restrict a firm from outside the region from competing for the work, nor would a PLA limit competition in any way.
“A PLA simply assures that contractors will pay wages, provide benefits and ensure working conditions consistent with local collective bargaining agreements,” he wrote.
Dale Stewart, executive secretary of the Southwestern Illinois Building and Construction Trades Council, said PLAs have been used for more than 400 area projects over the last five years, including two of the largest in the country – the building of the $4 billion Prairie State Energy Campus in Washington County and the $3.8 billion expansion of the Phillips 66 Wood River Refinery in Roxana.
“They have their own preferred contractors throughout the country,” Stewart said. “They say the skills are not available locally. It just means they don’t want to hire locally. We’ve got an investment here. We want southwestern Illinois to grow. If we’re raising (tax) money here, we want to spend it here, too.”
Sterman said the council is considering an alternate strategy of trying to get the federal funds redirected to a different levee project – elimination of underseepage caused by the construction of the Melvin Price Locks and Dam, completed in 1994. Because that problem resulted from a federal design flaw, the federal government is responsible for the entire cost.
Sterman and other local leaders have raised concerns for several months that the Corps won’t finish that project by 2015, leaving it a “weak link” in the levee system and a possible stumbling block to the council’s desire to complete the levee upgrades before a determination by the Federal Emergency Management Agency that the floodplain is at high risk of flooding. Such a determination would trigger costly flood insurance requirements for businesses and homeowners and potentially limit new development.
Petersen said design of a project to correct the underseepage caused by the locks and dam is under way and it is anticipated that construction will begin within two years, depending on congressional appropriations. He said the Corps has been correcting above-ground problems of the levee systems for 20 years and is in the “home stretch” toward restoring the authorized 500-year level of protection.