Everyone knows by this time that the St. Louis Rams’ lease of the Edward Jones Dome is the most one-sided real estate deal since the Dutch West India Co. bought Manhattan island for 60 guilders.

For nearly 20 years the Rams have played in a stadium built entirely with public funds, they’ve paid a bargain-basement rent of a half million dollars per year and they’ve been entitled to keep all kinds of revenues, right down to the loose change in the seat cushions.
On top of all of that, the lease calls for the stadium to be in the upper echelon of NFL stadiums by the end of 2014 or the team can walk away. The team and the St. Louis Convention & Visitors Commission had different conceptions of what that upper echelon would look like. It ended up going to arbitration; the CVC lost, and – to add insult to injury, as they say – the CVC had to cover the $2 million in attorney’s fees the team racked up during the dispute. Ouch!
When it comes to public funding of sports venues, people tend to fall into two camps. On the one side are those who say the owners are gazillionaires and they can afford to – and should – pay for a new stadium themselves if that’s what they want.
On the other side are the sports fanatics who can’t imagine their town without professional sports, and they’re willing to drop their drawers at the first hint that their beloved team might hit the road.
I, on the other hand, come down squarely in the middle. In the area of public funding for sports venues, government should act like a business. It should conduct a cost benefit analysis, opting in only if it is a profitable venture. After all, that’s what the owner is doing. In this public-private partnership, both sides need to profit.
Take, for example, the St. Louis Cardinals – one of the oldest of Major League Baseball’s franchises. Around the turn of the millennium, Cardinal ownership wanted a new stadium and wanted public funding to help pay for it. After some hemming and hawing and haggling, government opted in for about 10 percent of the project cost. This was a good business decision. Consider the following:
The Cardinals date back to the 1880s. For three quarters of a century they were the westernmost team in either league. They had a virtual monopoly on the western half of the Midwest and much of the south. Their games were broadcast far and wide and covered by many newspapers. The Cardinals became the Heartland’s team, and they still are.
Cardinals telecasts on FOX Sports Midwest are shown in nine states and rank second highest in local market television ratings in Major League Baseball. The play-by-play of their games is broadcast by 117 stations across nine states (Arkansas, Illinois, Indiana, Iowa, Kentucky, Missouri, Mississippi, Oklahoma and Tennessee).
That’s why you can turn on a game on a Tuesday night and see 40,000 fans in the seats at Busch Stadium. And that’s why the Cardinals are such an important economic component of the regional economy. Those aren’t just residents of St. Louis and Ballwin and Edwardsville in those seats. They’re families from farms and cities from across that nine-state geography. Forty percent of the three- million-plus fans they draw every year come from more than 50 miles away. They stay for days in our hotels, eat in our restaurants, shop in our stores and enjoy all the other things that St. Louis has to offer – spending money the entire time they’re here. This happens 81 times during the regular season, which lasts for half the year. Nine out of the last 17 years, the team has gone to the post season and added to its economic impact. The St. Louis region gets lots of return on investment from this deal.
The Rams, on the other hand, have a relatively small following. There are NFL teams in Chicago and Kansas City and Nashville and Indianapolis. And the people in states like Oklahoma and Arkansas don’t give a flip about the St. Louis team. Their hearts and souls ride with their Sooners or Cowboys or Razorbacks.
We don’t actually know what economic impact the Rams have on St. Louis because no one, so far, has bothered to calculate it. But if you’ve ever gone to a Rams game, you know that most of the patrons are coming from the St. Louis metro area. They come down in their cars, trucks and RVs, and they bring their own food and drink. They tailgate before the game. They tailgate after the game. And they go home. The biggest economic impact the Rams have is during the years when they stink because fans from places like Green Bay, Wis. buy up the tickets and fill the dome.
The payoff for the public side in this deal is meager. And because it’s meager, so should be the public share. The private side stands to make lots of money from this investment. The public side does not. If government sits down and does a rational assessment, the decision becomes clear. Walk away.
Alan J. Ortbals is vice president and chief operating officer of the Illinois Business Journal. He can be reached at aortbals@ibjonline.com. 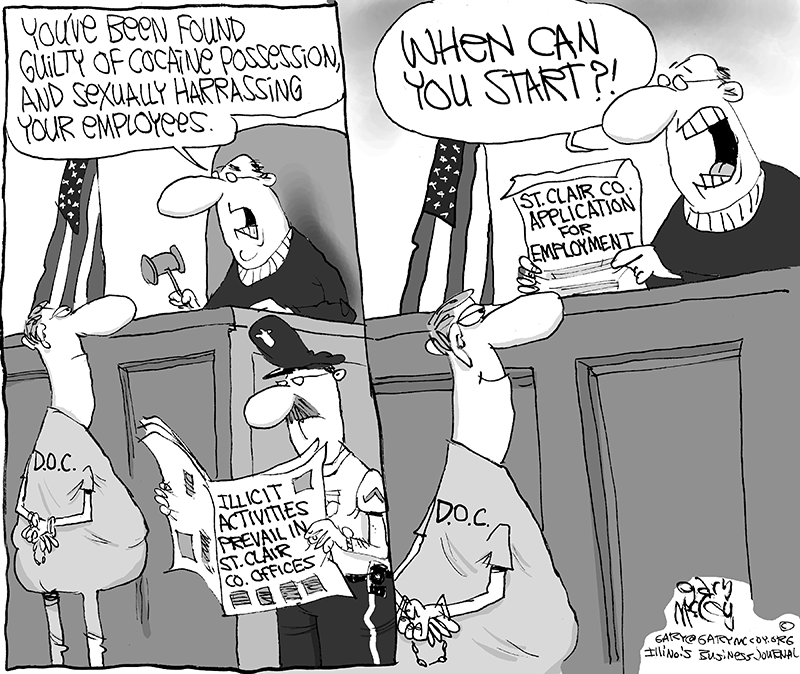