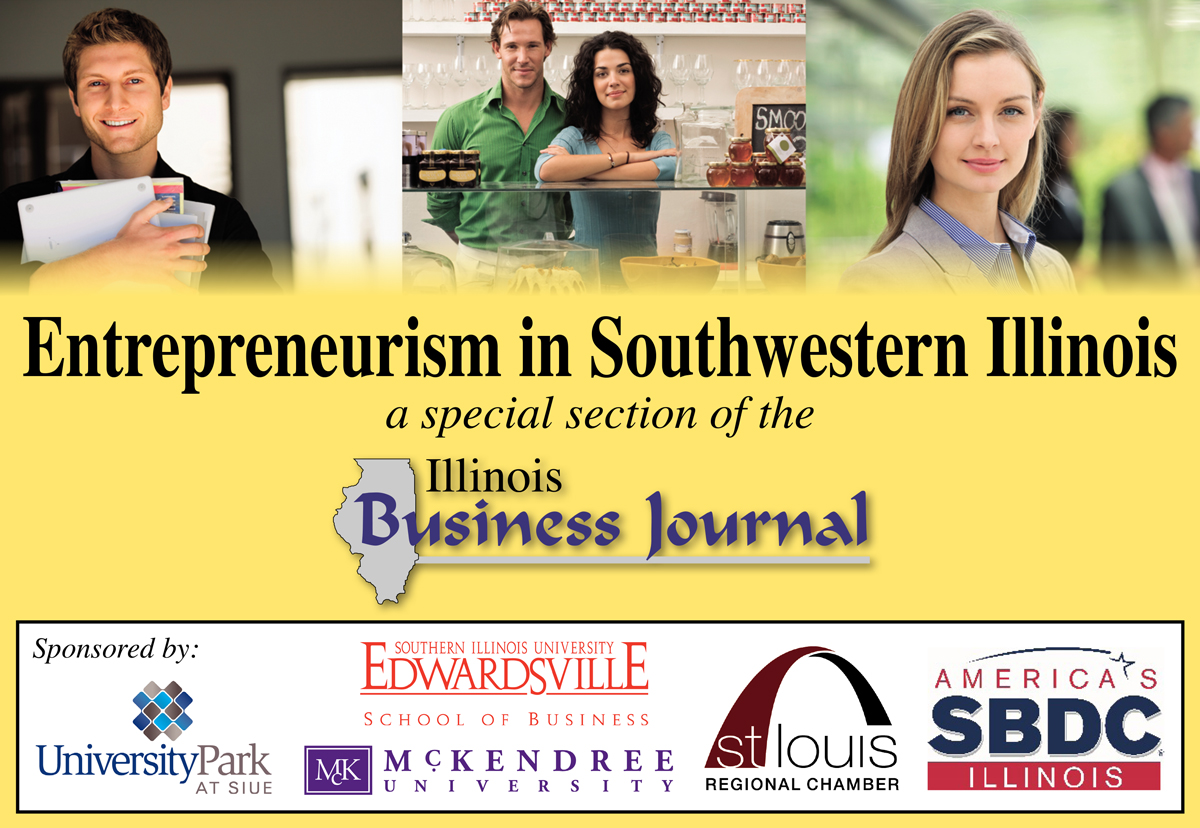 By KATE GENO
Kerry Smith has focused her talents and energy on serving the Southwestern Illinois business community for the past 13 years. From launching the Illinois Business Journal in 2000 to her new venture, Informationworks, Inc., Smith seeks to provide services that will help companies thrive.
Smith’s entrepreneurial spirit was sparked during her 10 years at the Houston Chronicle where she reported on a wide range of business topics. When her corporate contacts began asking for public relations and communications assistance, she answered their call by starting her own public relations firm.
“I always liked having creative freedom, a flexible schedule and the ability to pursue different avenues in my work life,” says Smith, of Edwardsville. “Journalism and public relations became the ideal career opportunities for me to combine those elements.”
An entrepreneurial opportunity presented itself to Smith again after she relocated to Illinois in 1999 and was working as a staff writer for the Alton Telegraph. She noticed a significant lack of business news coverage pertaining to Southwestern Illinois compared to St. Louis. She decided to remedy this oversight by launching the Illinois Business Journal in 2000.
“I never set out to become an entrepreneur,” says Smith. “But when I see an unmet need in the marketplace, it becomes my mission to fill that need.”
From 2000 to 2013, Smith organized and published the Illinois Business Journal. She researched and developed stories based on current and near-future legislation, market trends and national, regional and local industry news.
In 2013, Smith identified another untapped opportunity to serve the business community. She decided to end her tenure at the Illinois Business Journal to start a new company, Informationworks, Inc., to provide third-party competitive intelligence and database research for corporate clients.
“My goal is to save companies time and manpower when researching the viability of a prospect or acquisition,” says Smith. “CEO’s can outsource the research to Informationworks and receive creative, ethical human intelligence in return.”
Informationworks empowers its clients in a multitude of ways. Smith works with companies who need detailed information about a competitor’s products and services before making a major business decision. When managers of for-profit and non-profit organizations seek credibility and publicity through mass media channels, Informationworks writes and distributes positive and newsworthy information to promote their operations and news. When a company is looking to do business with a new client, Informationworks will conduct research to ascertain whether they are a viable prospect.
“What I enjoy most about this new venture is continuing my relationships with the companies and CEOs that I was blessed to work with during my time at the Illinois Business Journal,” says Smith. “I can support them in my new capacity by equipping them with the information they need to make the best decisions for their companies.”

Code 3 Spices go from back yard to metro markets

By ALAN J. ORTBALS
Chris Bohnemeier, an information technologist, and Mike Radosevich, a local police officer, were a successful barbecue competition team. Bohnemeier’s rubs were popular on the circuit so they bottled them for sale at the competitions, but it didn’t stop there.
They called it Code 3 Spices and took their recipe to a manufacturer to step up production, but still only making 10 to 20 cases at a time for sale to small butcher shops and the like.
“We started out with friends, mom-and-pop butcher shops, real small venues just to see how it went,” said company president Bohnemeier. “We started a Facebook campaign and a social media campaign which grew very rapidly and everybody wanted to try it — not solely because of the flavorful product but also because of the causes that we were giving back to.”
Bohnemeier and Radosevich donate 50 cents from the sale of each bottle to first responder causes: BackStoppers, a St. Louis organization that assists the families of fallen first responders; and Safe Call Now, a 24-hour crisis prevention hot line for first responders and the military.
Although they just started the business in Collinsville less than a year and a half ago, Code 3 Spices are now sold by all Schnucks stores,  Dierbergs markets and Whole Foods stores in the metro area, as well as butcher shops across the region — 120 outlets in all. They got there, according to Bohnemeier, by persistently making phone calls and knocking on doors.
The next step, Bohnemeier said, is to get distributors in the South and Southwest where the grilling season never ends. Eventually, they are hoping to take their product nationwide.

By ALAN J. ORTBALS
Patrick Voss has been making monsters since he was a child. There was always something about monsters that fascinated him. He just never imagined it would end up as a full-time business endeavor.
Voss worked for ATT for 22 years but was making masks in his spare time for sale to costume shops. Along with his whole department, he was laid off last May. That’s when he decided to try to turn his hobby into a manufacturing business in Fairview Heights called VFX Creative Studios.
Since he knew the layoff was coming, he had time to prepare. For years he had attended TransWorld’s Halloween and Attractions Show, an annual themed business expo which had been moved from Chicago to St. Louis. Last year, he and his partner Mike Daube, created several life-sized puppets: two zombies, a clown, a werewolf and a scarecrow. He put all of the expenses on his credit card but it paid off. Voss said that by the third day of the show, they had taken so many orders, they had to start a waiting list.
Not only that, but they also had to step up production. They rented a building and brought in a variety of people from seamstresses to artists and have sold more than 100 of their puppet creations, which retail between $1,450 and $2,250.
Voss said he had a lot to learn and quickly — space rental, employees, training, insurance, safety and more — but he’s looking forward to the HAA Show coming up March 20-23 at America’s Center in St. Louis.
“This year we have some new puppets that we’re bringing to the show,” Voss said. “We’re making a new clown and a new zombie and we have a family-friendly line that we’re debuting.”