It seems these days we are beset and besieged by a host of difficult problems, both on the state and national level. One might, in fact, have a difficult time just choosing what our biggest challenge is. Consider the following.

Our economy is still not fully recovered from the Great Recession. Unemployment remains high – particularly in Illinois. Wages are stagnant, and the housing sector has yet to rebound.
The federal government hasn’t balanced a budget since 2001 and our national debt, which was less than $1 trillion when President Ronald Reagan first took the oath of office, has ballooned to nearly $17 trillion today and is mounting with each passing minute.
The big entitlement programs, Medicare and Social Security, are on a collision course with reality as their expenditures outstrip their revenues. The gap only gets bigger.
Here in Illinois, we have no right to smirk at the bankruptcy of Detroit. With more than $90 billion owed to the pension funds and a year-long backlog of bills, we’re well on the road to perdition ourselves.
That’s a short list. You’ve probably already thought of more to add to it. But none of them rank number-one on my roster. I think our biggest problem – the real threat to our existence – is dysfunctional government.
When you review American history, it’s clear to see that this country has done some remarkable things. We engineered the transcontinental railroad and started a system of land-grant colleges – both while fighting a civil war. We took on the robber barons, broke up the monopolies, created a national park system, built the Panama Canal, won the War to End All Wars, built dams and roads and bridges. We defeated fascism and communism, built the interstate highway system and sent men to the moon.
We did all that by working together. But in 2013 – if by some small miracle – some piece of legislation is passed by the U.S. Senate, it doesn’t matter because it’s DOA when it reaches the door of the House. The House, on the other hand, passes lots of bills that never even get a hearing in the Senate.
Recently, Senate majority leader Harry Reid threatened to use what they refer to as “the nuclear option,” which is simply acting by majority vote instead of a super majority. Why that’s a nuclear option, I don’t know, but that’s the way they view it. Did he pull this bomb out of his pocket to reform the tax code? Revamp Medicare? Restructure Social Security? Pass a budget? No. Just to get some presidential appointments approved. Amazing!
Up in Springfield, Quinn, Madigan and Rutherford are tearing at each other’s throats while the ship of state is sinking hard at the bow into a sea of red ink.
And the Missouri legislature’s not much better. Although the Republicans have a super majority in both the House and the Senate, some Republicans were threatening to filibuster other Republicans’ bills on the last day of the session. And since that day, Gov. Jay Nixon has vetoed a full 29 of their more stellar achievements.
Yes, we are facing some huge problems. But we can solve them all if our elected officials would simply work together, if compromise ceased to be a four-letter word and if the politicians in Washington D.C., Springfield, Ill. and Jefferson City, Mo. came to the realization that governing is not a zero-sum game.
There is a great opportunity for our leaders to shine coming up this fall in Congress, when once again we bump up against the debt ceiling. But both sides are already staking out their positions and vowing not to budge. Wouldn’t it be great if, instead, they worked together to revamp the tax code and modify the entitlement programs to put us on a path back to a balanced budget and long-term entitlement security? Don’t bet on it.
Alan J. Ortbals is vice president and chief operating officer of the Illinois Business Journal. He can be reached at aortbals@ibjonline.com. 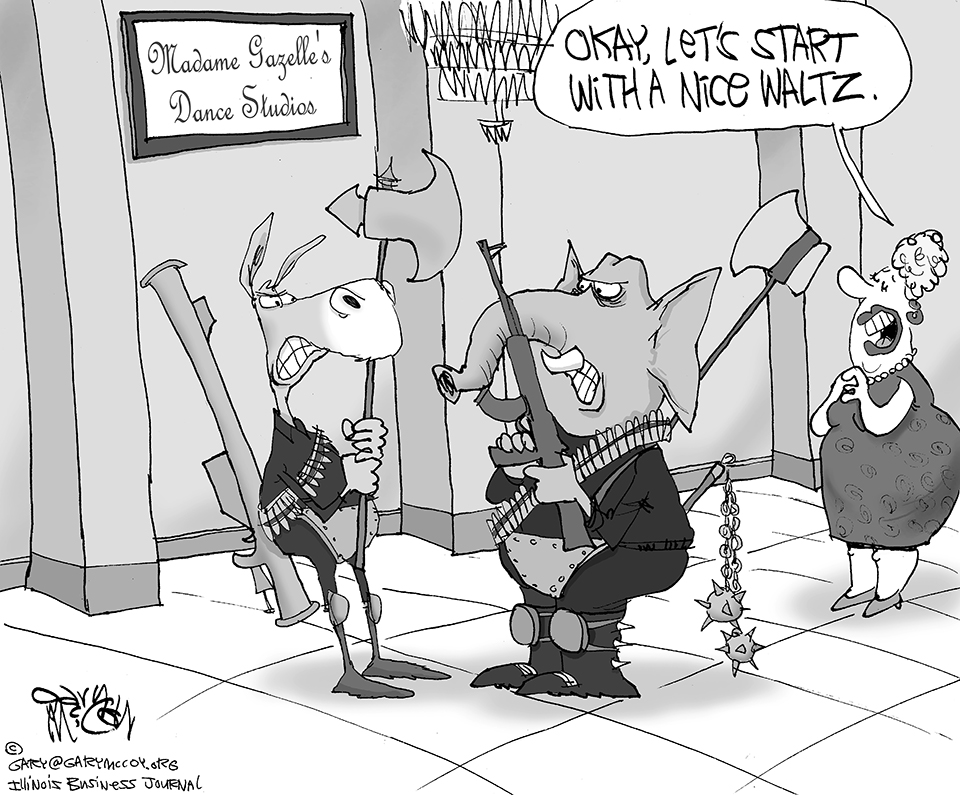 The Patriot Act, not your credit score, could be what’s holding up your mortgage loan app