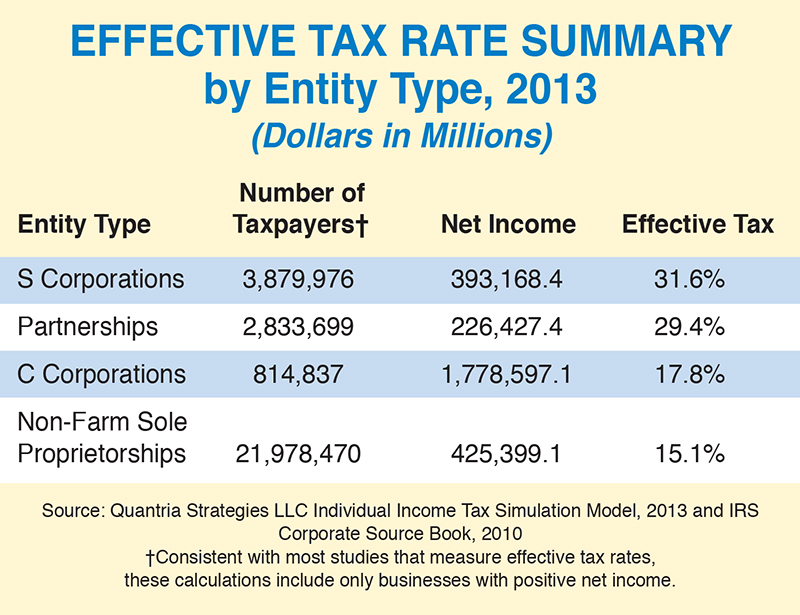 A study conducted for the National Federation of Independent Business and The S Corporation Association claims small businesses carry a heavier tax burden than large ones.
The analysis was performed by Quantria Strategies LLC, a private consulting company that specializes in the analysis and design of public policy options.
“The U.S. tax code is unfair and complex,” said NFIB president and chief executive officer Dan Danner. “(The Quantria) study provides valuable data that confirms small businesses currently pay a higher effective tax rate than many large corporations. This study delivers a strong counter argument to the president’s announcement last week that corporate-only tax reform is the best path.
“Over 75 percent of all small businesses in the United States are taxed at the individual rate – signifying the need for comprehensive reform that addresses both individual and corporate taxes,” added Danner. “NFIB will continue to advocate for a level playing field so that small business owners can create jobs and grow their business.”
Quantria conducted a similar study in 2009 for the U.S. Small Business Administration which produced similar results. Since then, the new study claims, the tax situation for small businesses has gotten worse. It points to two events over the past four years that have significantly upped the ante for small business owners.
One was the passage of the Patient Protection and Affordable Care Act that imposed a new 3.8 percent tax on investment income beginning this year.
The other was a result of the resolution of the fiscal cliff debate earlier this year. That raised the top statutory tax rate – which applies to individual and pass-through business income – from 35 percent to 39.6 percent. It also reinstated what’s referred to as the “Pease limitation” on itemized deductions, which had the effect of raising top marginal tax rates by another 1.3 percent.
Quantria says many people focus on the marginal tax rate, when in actuality few taxpayers ultimately pay the full statutory rates. Average effective tax rates, Quantria claims, are a better measure of whether a particular industry or form of business faces greater or lesser federal income taxes relative to others.
“It’s important for all business entities to look at not just the marginal rates, but also the effective rates – what people actually pay,” said Chris Whitcomb, tax counsel for the NFIB. “Marginal rates do not reflect the actual taxes paid after allowable deductions and credits and things like that. When you look at effective rates by entity type, I think you get a better picture of what people are actually paying out there.
“Most of our members – 77 percent – are pass-through entities,” Whitcomb added. “Our method has always been that if you’re looking at tax reform, it’s important to do it comprehensively. This study is an attempt to look at some of the effects of the code on the way people pay their current taxes.”
Ken Diel, managing member, CPA and a certified valuation analyst at Diel & Forguson LLC, says he was not surprised by the conclusion that S corporations pay higher effective tax rates than large firms.
“They (S corporations) don’t have the advantages of corporate tax specialists,” said Diel. “They aren’t able to take advantage of some of the things that the major corporations do, like research and development credits and other tax credits that are made for the big guys who have the support of congressmen. Small business people have never been able to take advantages of things like that.”
Diel agrees that there’s a big difference between marginal tax rates and effective tax rates that most people just don’t understand.
“When we do a tax return for an individual,” Diel said, “I show them their effective tax rate and their marginal tax rate, because people forget that everybody gets to use the 10 percent bracket, the 15 percent bracket, the 18 percent bracket, etc. That’s a really huge difference to a lot of people. A blended tax rate versus a non-blended tax rate is just totally different.”
Whitcomb says the study was conducted in preparation for Congress taking up tax reform possibly later this year. He adds that U.S. Rep. Dave Camp (R-Mich.), Chairman of the House Committee on Ways and Means, is very focused on tax reform. And that U.S. Senator Max Baucus (D-Mont.), the Chairman of the Senate Committee on Finance, is also pushing comprehensive tax reform. According to Whitcomb, the two have been working together on moving the idea of comprehensive tax reform forward.
While it may seem to many that little of import is coming out of Congress, Whitcomb says it’s important to be prepared.
“Things like this are always not happening until they do happen,” Whitcomb said. “It’s important to have this message out there that comprehensive tax reform is the important way to look at it.”