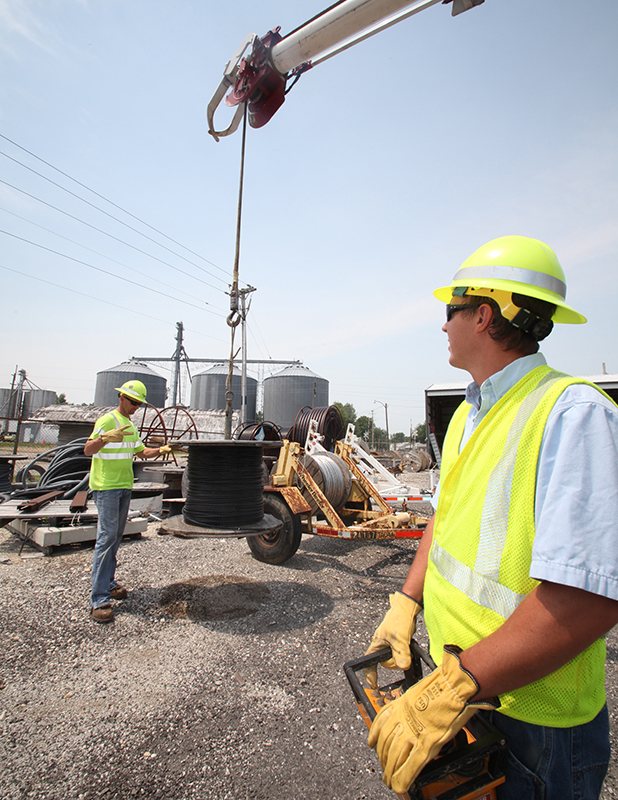 The Metro East area is playing a crucial part in Ameren Illinois’ elaborate, billion-dollar plan to improve natural gas and electric service for years to come.
From a new, $6 million, 11-acre worker training facility in Belleville to the 600 hirings anticipated as part of its smart grid infrastructure plan, the utility will provide a solid boost to the region, said Richard J. Mark, president and chief executive officer.
“People are going to see a lot of growth for Ameren Illinois. This could be the catalyst for economic development in southern Illinois,” Mark said. “I think we’ll generate interest from outside businesses looking to relocate here.”
Some $42 million is being invested in Metro East upgrades in 2013, and much more is planned in coming years.  Mark said every dollar the company spends is estimated to generate another $1 to $2 of benefit across central and southern Illinois.
As part of a $1 billion infrastructure modernization investment systemwide, the company is replacing and refurbishing underground distribution cables, fortifying utility poles, refurbishing high-pressured gas pipelines and installing intelligent switches and sensors that can isolate power outages and enable services to be restored faster.
Along with advanced meters, the changes aim to provide utility customers with more options to control their energy usage and hopefully save money.
Ameren Illinois’ Metro East Training Center opened in early October at 1590 East State Route 15 in Belleville. It is used to train electric and gas service workers — both new hires and existing employees — on new technologies that are part of the energy delivery and modernization plan approved by the state in 2012.
“Our linemen, for example, will be trained in a classroom setting on installation of new capacitor banks and automated switches, learning how to repair and maintain them. When they go out in the field they will be very proficient in making sure that equipment is maintained and repaired efficiently,” Mark told the Illinois Business Journal.
Most of Ameren Illinois’ 3,000-member workforce gets regular yearly training. “From Springfield down to the southern tip of the state, many of them will be coming through the Belleville training center,” he said.
Some 100 workers a week will be trained in Belleville. The company also has smaller training centers in Decatur and Peoria.
“We cover 43,700 square miles in Illinois, and we have people spread throughout 87 counties. The center in Belleville has good highway access. And there are facilities nearby, hotels, restaurants. That all was taken into consideration in locating at Belleville. Some training may take up to a week. They need places to stay and eat and get around.”
Many of those to be trained are IT workers who are developing the system that engineers and others will be tasked with building. Cross training will expose both “front and back office” personnel to each other’s work, to give everyone a team understanding of the changes.
“The more we can do that, the better the product, from a safety and efficiency standpoint. The designers who understand the challenges in the field make for a better product, help prevent injuries and a better situation overall for the people who are building this 21st century energy infrastructure,” Mark said.
Ameren Illinois has already hired some 280 of the planned 600 workers and began doing that in 2012 when it became evident the legislature was about to pass the authorizing legislation.
Not all of the new workers are permanent or full-time. Some are program developers, the IT personnel who are designing the system. Some are working under contract and will be replaced with field workers who will do the actual installation, maintenance and repair. Among the latter will be apprentice linemen, gas repairmen, substation workers and truck drivers.
Customers will see much of the work for themselves.

“A large piece of our infrastructure build-out will be touching them directly. In June, we’ll start deploying smart meters, with 40,000 smart meters to be installed by December 2014. Workers will be knocking on every door to install. They will also be rebuilding substations and reconducting lines.
“That’s good news that you’ll see them, but it’s also a concern. A lot of work will be done near a roadway. People will need to consider safety as a No. 1 priority and slow down in work zones,” Mark said.
Some 780,000 smart meters are to be installed in all of Ameren Illinois’ territory between 2014 and 2020. The Illinois Commerce Commission mandated that 62 percent of the meters be installed over an eight-year period.
A substantial “non-meter program,” which includes system rebuildings, station repairs and underground work, goes through 2022, part of the 10-year strategic plan.
“Most communities haven’t had significant improvements in their infrastructure in the last 30 to 40 years and sometimes more. The station rebuilds are significant. We’re doing an assessment of the 43,700 square miles that we serve, and we’ve identified areas that are high growth, or with dense population. We’re rebuilding that entire electric and gas grid to upgrade to meet needs for the next 50 to 70 years.”
One goal is to make the system more durable in storms.
“We know areas that have been affected by weather. We have data to track those areas. Instead of replacing a standard pole, we’ll make sure that pole is a size or two larger,” he said.
Moving utilities underground is a possibility, but not routinely.
“We will only ‘underground’ (lines) where it’s practical, for a couple of reasons. First, it’s very expensive.” The logistics of doing it is the second. Moving lines below ground does not make sense when there is no available space or when lines run above water.
“We have a team of engineers who are analyzing all that now,” Mark said.
Ameren Illinois can recover some of its costs from customers but is limited by law to an annual rate cap of 2.5 percent. Senate Bill 1652 (the Energy Infrastructure Modernization Act) calls for other consumer protections under the eyes of the ICC, including performance metrics and penalties and peak time rebate tariff.
“There are metrics we have to meet and we have to be vigilant to do it in a strategic manner. We do not want costs to increase the customer’s total bill by more than 2.5 percent a year. Then, we also have certain standards on performance and increasing the reliability,” Mark said. The company will be judged by the ICC on the frequency of outages and other criteria.
Metro East is an important backdrop for Ameren Illinois: In 2012, the company established its Illinois headquarters in Collinsville, adding 150 new jobs.
“Our smart meter lab is there. Much of the technology is being developed in Collinsville,” said Mark, whose family goes back multiple generations in the same community.
The company has formed dozens of partnerships with labor and education to see the project through. Kaskaskia College, for example, is offering tutoring to the people who will eventually be tested on math and other subjects as part of apprenticeship training.
Another example: A $3.3 million “technology applications center” has opened on substation property at the University of Illinois in Champaign. It’s a laboratory working with the university on among other things making sure that smart grid-enabled appliances will be working correctly with the infrastructure improvements.
In recent months, Ameren Illinois has forged partnerships with state high school districts to plan for implementation of Science, Technology, Engineering, and Math (STEM)-based curriculum to educate students and teachers on the range of technical skills necessary for a successful career in energy. Tours of substations and other Ameren Illinois facilities, as well as job fairs are being planned across the company’s service territory in the next year.
Interested candidates can view open positions and apply at Ameren.com/careers. Information is also available at facebook.com/AmerenCareers.
The company shared the story of Travion Brock, one of the 85 apprentice linemen participating in the Ameren Illinois apprentice program. Brock said he needed a change from his desk job and now enjoys the challenge of being responsible for maintaining the Ameren Illinois system. Brock works out of the utility’s Belleville Operating Center.
“I’ve been in the apprenticeship program almost three years. The trainers teach us how to work safely and want us to be as good if not better than them,” Brock said. “To know that I’m the guy at two o’clock in the morning turning everybody’s lights on, and having a customer give a hat’s off to me, that’s a reward in itself.”
Ameren Illinois has 1.2 million electric and 806,000 natural gas customers in Illinois. The company maintains 18,000 miles of natural gas pipelines, 45,700 miles of electric distribution lines, 4,500 miles of electric transmission lines, 1,500 substations and more than 1.3 million single/multi-pole structures.