1. The Jefferson Barracks Bridge, often called the J.B. Bridge, was built in 1983, providing enhanced connectivity between south St. Louis County and Monroe and St. Clair counties in Illinois. According to the 1980 census, Monroe County had a population of just 20,117 and since then has added almost 13,000 residents to total 32,957 in the 2010 Census. That represented an increase of 19.3 percent from 27,619 in 2000, making it one of the fastest-growing parts of the St. Louis metropolitan area. 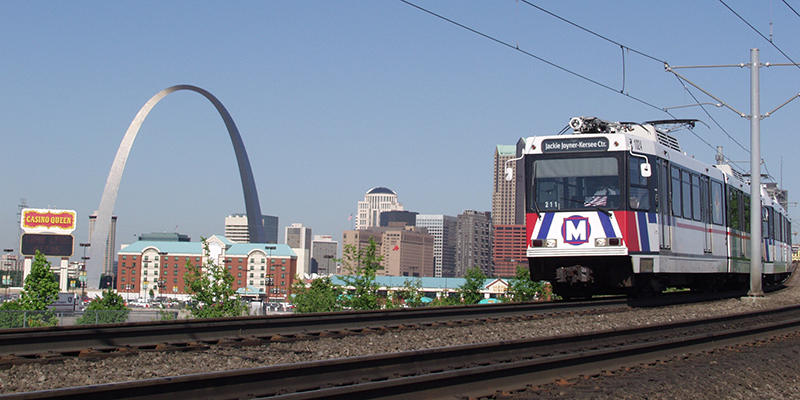 2. The $465 million first phase of MetroLink officially opened July 31, 1993 with a 17-mile stretch from North Hanley Rd. in North St. Louis County to 5th Street and Missouri Ave. in Illinois. The extension to Scott Air Force Base opened in 2003, representing an additional investment of $420.9 million. Today the light-rail system has 37 stations, stretching 46 miles from Lambert-St. Louis International Airport south to Shrewsbury, Mo. and east to Scott Air Force Base. Annually, more than 17 million commuters board the system.

4. Over the years, U.S. Steel’s Granite City Works (formerly National Steel) has continued to invest in its operations and has attracted related investments. Key projects have included a $34.6 million renovation in 1987, the new $67 million Galvalume coating line in 1994, $31.6 million in upgrades in 2004 and the $280 million cogeneration facility completed in 2009. That same year, SunCoke Energy completed its $290 million coke oven and steam distribution system to meet the growing needs of the steel mill.

5. Sauget continued to attract industrial, manufacturing and logistics-related investments over the years with examples including Monsanto’s $31.2 million renovation in 1987 and $36.2 million in additional investment in 1994. Big River Zinc invested $37 million there in 1997 and both Gateway Terminals LLC and Midcoast Aviation (now Jet Aviation)completed investments totaling $12.5 million and $36 million, respectively, in 2007-2008. The 255 Logistics Center was completed around the same time at a cost of $15 million. 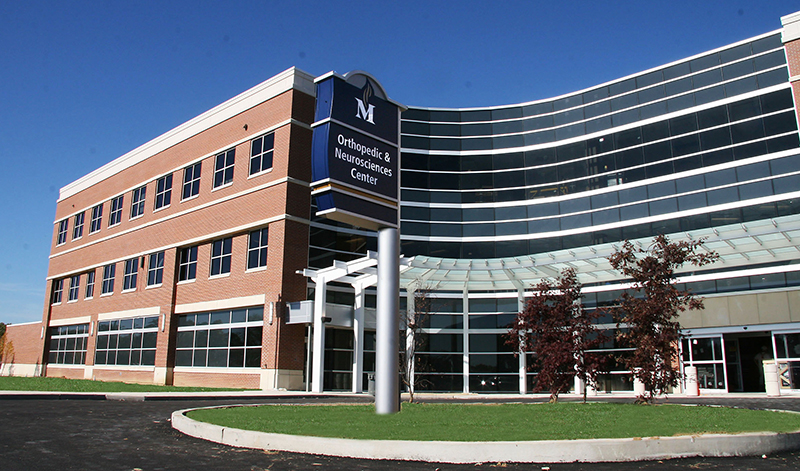 6. Southwestern Illinois’ major healthcare facilities continued to expand and undergo renovations to meet patient needs.  Examples over the decades include a $10 million renovation at Belleville Memorial Hospital in 1987; millions of dollars in improvements at Gateway Regional Medical Center in Granite City between 2002 and 2005, including the development of the new $4.5 million health center in Edwardsville; Saint Anthony’s Health Center renovations totaling $28 million in 2005 and another $40 million in 2011; more than $20 million in improvements and expansions by Anderson Hospital in Maryville and Collinsville between 2006 and 2009; Alton Memorial’s new Duncan Wing in 2011; millions more invested by Southern Illinois Healthcare Foundation and the opening of the $30 million Center for Orthopedic and Neurosciences at Memorial in Belleville in 2011.

7. Scott Air Force Base has continued to attract new investments over the past 30 years, with major projects ranging from the $19 million Air Force Communication Command Building that was developed in 1988 to a series of projects totaling $101.7 million in 2004. These projects included Anti-Terrorism/Force Protection; the Munitions Storage Facility; the Tanker Airlift Control Center and the Shiloh, Mascoutah & Belleville Gates. After surviving the 2005 round of BRAC, SAFB went on to welcome additional investments such as the $130 million U.S. TRANSCOM Surface Deployment and Distribution Command and the Joint Intelligence Ops Center in 2010.

8. The $5.8 million Gateway Convention Center opened in Collinsville in 1990 adjacent to the Holiday Inn, making Collinsville the first major convention destination in the Metro East. It was followed by the Fountains at Fairview, which was under construction with an $8.5 million price tag by 1999 and the $4.2 million Regency Conference Center completed in O’Fallon in 2008.

9. University Park opened at Southern Illinois University Edwardsville in 1991, after $3 million was invested in infrastructure to serve the site. It was one of several business parks or major office developments that would be developed in the Metro East over the next two decades. Others included Magna’s $14 million operations center in Belleville in 1994-1995 and the $18 million Alton Center Business Park in 2002-2003.

10. The new $114 million Clark Bridge opened in Alton in 1994, improving access to Alton and northern Madison County. In 2006, the renovated McKinley Bridge reopened to traffic after a $40 million rehab project. It had been closed since 2001.

11. Gaming arrived in Southwestern Illinois in 1991 when the Alton Belle Casino opened on the Alton riverfront,  followed in 1993 by the Casino Queen opening on the East St. Louis riverfront. The Casino Queen made the transition from riverboat to land in 2007, following the completion of a new $92 million land-based facility.

12. The Melvin Price Locks & Dam in Alton, which represented an investment of almost $1 billion, was dedicated in 1994 after almost 16 years of construction. Every year, millions of tons of commodities pass through the facility, which is one of the largest locks on the Mississippi River and the first replacement structure on the Upper Mississippi River nine-foot navigation project. The dam is 1,160 feet long with nine tainter gates, each 110 feet wide by 42 feet high.

13. Numerous riverfront attractions developed since 1983 have helped to drive the tourism industry in the Metro East. In East St. Louis, $4 million in private donations led to the 1995 opening of the Gateway Geyser, one of the tallest fountains in the world and the centerpiece of the 34-acre Malcolm W. Martin Memorial Park; the spot is where the $4.2 million Mississippi River Overlook opened in 2008, providing spectacular views of the downtown St. Louis skyline. In Alton, major projects included the new marina and amphitheater, representing an investment of $25 million and the National Great Rivers Research Center and Museum, which opened in 2003 and continues to be expanded. The Confluence Tower in Hartford joined these in 2010.

14. Expansive new retail offerings became more commonplace throughout the Metro East, starting with the $33 million renovation of St. Clair Square shopping mall in the mid 1990s. Other major retail milestones included the opening of the $3 million State Street Shopping Center in East St. Louis in 1999; groundbreaking for Wood River Place, a $15 million 30,000-square-foot retail center in 2004; completion of the $16 million Nameoki Commons in 2005, and the opening of the $78 million Collinsville Crossing Shopping Center in 2006, the $58 million Edwardsville Crossing in 2009, the $90 million Green Mount Crossings in Shiloh in 2010, and the 125-acre, $90 million Belleville Crossing in 2011. 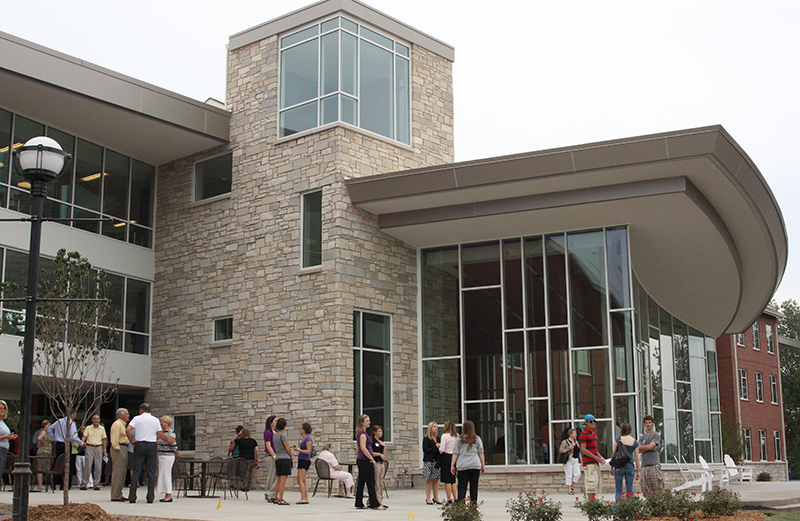 15. Dozens of investments during the past couple of decades continued to enhance Southwestern Illinois’ higher education system, with some of the largest including the $16 million expansion of the Belleville Area College Campus in 1996; the $23.5 million Templin Nursing Building completed by Lewis & Clark Community College in 2006; the $10 million renovation and expansion at Lindenwood University – Belleville completed in 2010; and the $14 million residence hall completed at McKendree University in 2011. At SIUE, it wasn’t just major projects like the original $27 million engineering building completed in 2000 that transformed the campus, but also the dramatic growth in enrollment, transition to Division 1 sports status and rebranding of the University as one of the top public universities in the state.

16. The $310 million MidAmerica St. Louis Airport opened in 1997 and is credited with helping to keep Scott Air Force Base off the chopping block during the 2005 round of BRAC, protecting a $3 billion economic engine for our region which continues to grow. In more recent years, MidAmerica Airport has also begun to attract major new tenants with Boeing announcing plans for a new $3 million assembly plant there in 2010 followed by the opening of North Bay Produce’s $5.7 million refrigerated warehouse in 2011.

17. Gateway Commerce Center welcomed Dial Corp.’s Midwest distribution center in 1997, joining existing developments such as Raifort Business Park and putting the region on the map as a prime location for the logistics industry. Unilever’s 1.3-million-square-foot, $28.3 million distribution center followed in 2003 followed by Hershey Foods’ $65-million, 1.1-million-square-foot distribution center in 2004. Various other name brand tenants have also located their facilities at the 2,300-acre industrial park and at the nearby Lakeview Commerce Center which opened in 2006 and today encompasses almost 2.3 million square feet.

19. With a total cost of $25 million, Gateway International Raceway opened in 1997, attracting more than 400,000 fans to watch professional motor sports in its first year.
Under new local ownership and with a new name, Gateway Motorsports Park is back and better than ever.  The 2012 reopening launched the biggest event schedule in the track’s history, including the NHRA Midwest Nationals.  Covering 180 acres of prime real-estate, Gateways MSP is the largest outdoor entertainment facility in the region, encompassing a quarter-mile, NHRA-sanctioned drag strip, 1.2-mile NASCAR oval track, 1.6 mile road course, a new Gateway Karting facility and a new 14-acre, off-road course. Over the next five years, $20 million will be invested with the goal of attracting grass roots and major motorsports events, entertainment acts, and special public, corporate and private events.

21. A reflection of the continuing aging of our population, the Metro East has welcomed several new senior housing developments over the past three decades, including both the $20 million Meridian Village in Glen Carbon in 1999 and the $16.3 million Eden Village in that same community in 2007-2008; the $7.1 million facility completed by Lutheran Senior Services in Belleville in 2003-2004; and the $9 million Cedarhurst Assisted Living Center in Collinsville in 2008-2009.

22. Ground was broken for Gateway Grizzlies’ GMC Stadium in 2001 and in 2002 it opened its gates for minor league play hosting Southern Illinois’ only professional sports franchise.

23.  St. Louis Downtown Airport has been the site of significant investment since 2001 with more than $31 million pumped into almost 20 different projects, ranging from ramp and taxiway expansions and widening to the new Federal Aviation Administration Air Traffic Control tower. Jet Aviation (formerly Midcoast Aviation) also has significantly expanded its presence at the airport, investing approximately $50 million between 1997 and 2008.

24. On April 22, 2002, U.S. Rep. Jerry Costello officially commemorated the Charles Melvin Price Support Center title transfer from the U.S. Army to the Tri-City Regional Port District. This action was an important first step in the redevelopment of the 814-acre military property into River’s Edge, a business and industrial transportation park. What could have been a hindrance on the local economy would grow to become the thriving America’s Central Port.

25. The $20 million National Corn to Ethanol Research Center opened at SIUE’s University Park in 2003. The only center of its kind in the world, it supports a diverse clientele, including academia, government, technology providers, trade associations, and domestic and foreign ethanol producers.

26. Born in the 1990s as part of Madison County Transit’s strategy to preserve rail corridors for future light rail possibilities and interim trail use, the MCT Trail System grew by 2011 into Madison County’s biggest tourist attraction. Featuring more than 100 miles of mostly paved, interconnected trails, the system can easily be accessed for bicycling, walking and rollerblading. The trails weave through some of the most picturesque parts of the county and are credited with enhancing the quality of life for residents and attracting adjacent residential development. Homes in close proximity to the trails sell much faster than similar homes elsewhere.
Today the MCT trail system is the crown jewel in the growing network of trails and on-road connections being supported across Madison and St. Clair counties by the Metro East Park and Recreation District.

27. Governors’ Parkway opened in Edwardsville in 2009. The new roadway was designed to relieve congestion and improve roadway access in Edwardsville, Glen Carbon and neighboring communities and is credited with making the area more attractive for economic development.

28. Ground was broken in 2009 for the New Mississippi River Bridge, a multifaceted project with a total price tag of $670 million, covering work on the bridge span itself and related work on both sides of the river to connect the new bridge into the reconfigured interstate system.

29. Southwestern Illinois captured the interest of the ethanol industry as Center Ethanol’s $110 million plant began operations in Sauget in 2008 followed by the opening of Abengoa Bioenergy’s $244 million plant at the Tri-City Regional Port District in October 2010.

30. ConocoPhillips’ (now Phillips 66) Roxana refinery expansion was completed in 2011, representing a total investment of $3.8 billion, the largest project in the region in the past three decades. It generated $325 million in local income during construction and, since completion, produces an estimated $48 million in annual income.

POINT: SHOULD ILLINOIS ADOPT A GRADUATED INCOME TAX? The need for a graduated income tax