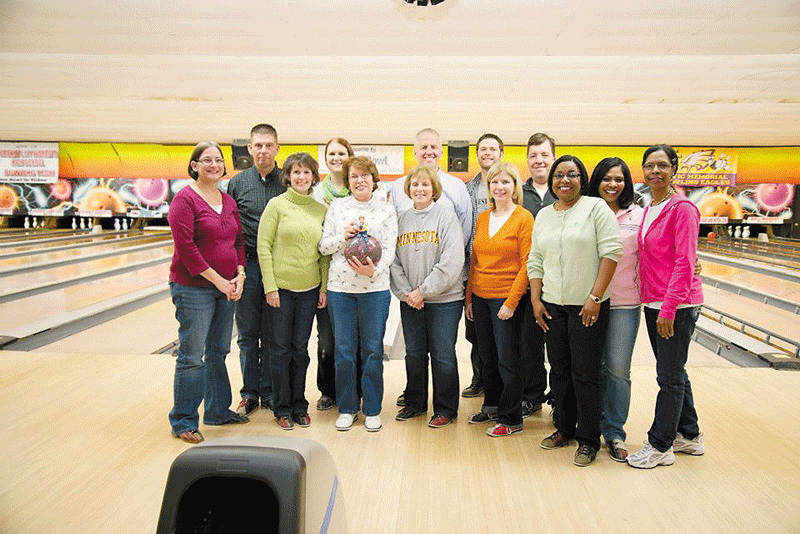 The Green Team is First Clover Leaf Bank’s community action group. While the word “green” has taken on environmental connotations in recent years, the Green Team is focused on community service.
“The spirit of generosity and charitable drive is the foundation of The Green Team,” said Dennis Terry, the bank’s president and chief executive officer. “This group epitomizes the basic philosophy of First Clover Leaf Bank. That philosophy is that we have a responsibility to be a good corporate citizen and make our markets better for all of our constituencies.”
Over the past 12 years, the group has been involved in countless charitable and community service events and programs. During 2012 alone, the Green Team recorded nearly 950 hours of community service – an increase of 27 percent more than 2011- and 86 employees participated in at least one event.
Last year, the Green Team was active in 23 different charitable events including the Relay for Life where it raised $7,400 for the American Cancer Society, and Coats for Kids that resulted in 250 coats collected and distributed to local children. Green Team members participated in the M.S. Walk, the Race for Hope, the Thin Mint Sprint, Miles for Meso and the Diabetes Walk. The Green Team also delivers Meals on Wheels and keeps the Plum Street corridor clean in Edwardsville.
First Clover Leaf Bank also sponsors events that bring a sense of fun to the community, Terry says, including the annual Santa’s Workshop – where children make holiday crafts and meet Santa Claus – and the annual Halloween Parade in Edwardsville. The bank’s African safari float featured a rhino, an exotic African bird, a couple of meerkats and a roaring lion. Teenagers danced in the street to the float’s music. The community bank hosted a pre-parade party at its St. Louis Street branch that featured a disc jockey, giant inflatables, hot chocolate and sliced apples with caramel sauce.
FCLB’s largest sponsored event is its annual Health Fair, which has been held every May since 2005. Planned and organized by the Green Team, the fair is free to the residents of Edwardsville, Glen Carbon and nearby communities. More than 30 healthcare-related vendors exhibit at the fair every year. Exhibitors include Anderson Hospital and local dentists, doctors, chiropractors and more. Information is made available to educate attendees about how to take care of themselves. There are also many children’s activities such as bounce houses and caricature painting. A free picnic lunch is provided for everyone, Terry says.
This year, the bank is making a couple of changes to the Health Fair. The first is that it will be held in September rather than in May. The second is that it will take place at the bank’s Goshen Road headquarters rather than Township Park.
For the past two years the bank has assisted Junior Service of Edwardsville/Glen Carbon in the development of the boundless playground. Boundless Playground Inc. is a developer of inclusive playgrounds. Because one in 10 children have a disability that makes it difficult to play on traditional playgrounds, Boundless builds playgrounds that are accessible to all children. Last year the bank introduced a 5k Fun Run and Walk to raise money for the Edwardsville/Glen Carbon Junior Service Club’s Boundless Playground project. Terry says it was completed in May and it’s the only playground in the St. Louis Metro East area open to the public that caters to children with disabilities.
Earlier this year, the bank donated $10,000 to the new Rotary playground that will be constructed in September. If there’s something going on in the community, says Terry, you can pretty well bet that the Green Team will be involved.
“What I have enjoyed most about working with the Green Team,” said Kevin Fitzgerald, a vice president and coordinator of the Green Team, “is seeing the time and energy our employees devote to making the community better and helping people in need.”