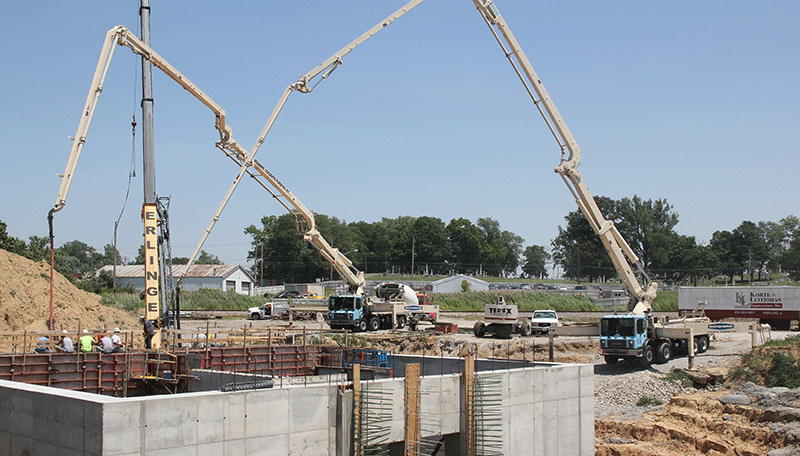 A program to modernize Belleville’s sewer system will reach an important milestone later this year when Phase I of its Long Term Control Plan is completed. Korte & Luitjohan Contractors Inc. is the contractor on the three-year, $41.5 million wastewater treatment project.
The city adopted the plan in 2007 in an effort to comply with the Federal Clean Water Act of 1972. It’s not uncommon, according to Korte & Luitjohan senior project manager John Whitworth, for a city the age of Belleville (which officially incorporated in 1850) to have combined sewers — those carrying both storm water and sewage. In heavy rain events, such a system can become overloaded, leading to discharges into public waterways. The goal of the plan, Whitworth says, is to eliminate or significantly reduce these discharges known as combined sewer overflows.
Belleville’s existing plant is more than 80 years old. Updating such systems is complex, time consuming and expensive. Korte & Luitjohan has extensive experience and expertise in constructing new water treatment facilities and modernizing old ones.
Working with treatment facilities, according to Whitworth, is much more complex than the normal building project. In the case of the Belleville project, he says, more than $8 million of process equipment had to be ordered and installed, excavations more than 30 feet deep had to be dug and extensive piping and pumping systems had to be built.
Working with an existing operating system adds other complexities, Whitworth says, as shutdowns, shift overs and start-ups had to be coordinated so that service would not be interrupted.
Korte & Luitjohan was able to save the city more than $100,000 through value engineering by winning approval to use fiberglass piping rather than steel or iron for the above-ground force main. Not only is fiberglass a cheaper installation option, says Whitworth, but it also reduces maintenance as it does not have to be painted like the metal alternatives.
The new systems have been put into service in stages. The west terminal lift station was brought online in July. In September, Korte & Luitjohan finished connecting the old piping to start sending the combined sewer overflow to the new systems. Modifications to the existing digester system will be the last part of the process to go online in late December.
Whitworth, who’s been with Korte & Luitjohan for 11 years, says that the contractor, the engineers and the owner share a common goal — to reach the finish line as a team.