A bill sponsored by U.S. Rep. Rodney Davis (R-Illinois) and announced on the campus of SIUE aims to prevent Americans from having to choose between keeping their unemployment benefits and seeking the additional workforce training needed to find a job. 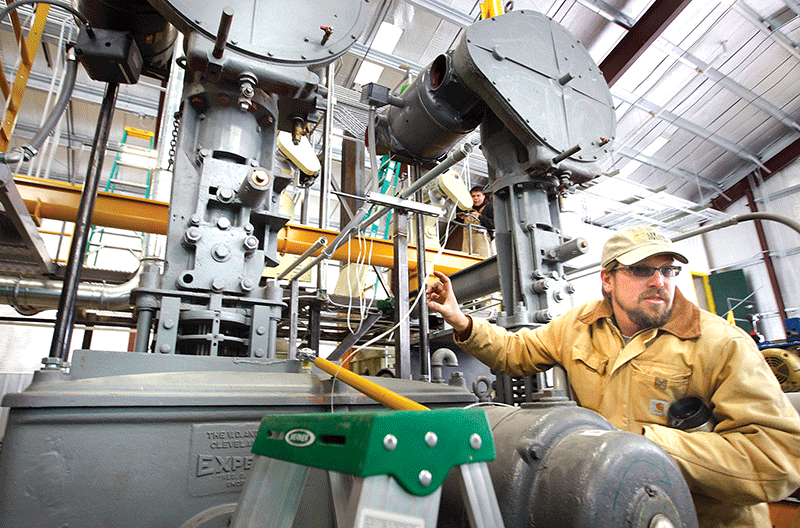 Opportunity KNOCKS (H.R. 1530) broadens the definition of “approved training” in what Davis and Southwestern Illinois leaders say is currently an overly complicated, often restricted Workforce Investment Act system. As it now stands, unemployed workers who seek training through programs at universities, community colleges and other technical schools risk losing their unemployment insurance benefits if the program is not specifically approved by the WIA.
Davis announced the bill recently at the National Corn-to-Ethanol Research Center in University Park on the campus of Southern Illinois University Edwardsville. The venue was fitting, he says, given that NCERC director John Caupert told the congressman about the need for such legislation during Davis’ visit to the biofuels training center during campaign season last fall.
“It was right here, just a few feet from one of our fermentation tanks, where Congressman Davis and I discussed the need for this bill,” said Caupert.
“I shared with him the story of a few of our people who were paying for their training to enter this new bioeconomy with money out of their own pockets, just to ensure that they weren’t risking losing their unemployment benefits.”
H.R. 1530, which is co-sponsored by U.S. Reps. Ami Bera (D-Calif.) and Jerry McNerney (D-Calif.), makes certain that workers who are seeking an industry-recognized certificate, an apprenticeship or an associate or baccalaureate degree will not be at risk of losing these benefits, Davis says.
The bill’s language specifies that such programs must be approved by each state’s workforce investment agency as well, and include any program on the state’s eligible training provider list as developed under the Workforce Investment Act of 1998.
The law was enacted to replace the Job Training Partnership Act and certain other federal job training laws with new workforce investment systems or workforce development. Enacted during President Bill Clinton’s second term, it represented an attempt to encourage business to participate in the local delivery of workforce development services. The primary vehicle for this was Workforce Investment Boards or WIBs, which were to be headed by private-sector members of the local community. A majority of board members were also required to represent business interests.
“The barometer of our success in workforce investment is the community college system,” said Davis. “But we have to give our workers the training to make that happen. Today there are 12 million unemployed Americans. This past March, the Dept. of Labor reported that people with only a high school diploma had an unemployment rate of 7.6 percent, nearly twice that of unemployment rates among college graduates. Those without a high school diploma are experiencing unemployment rates of more than three times that of high school graduates, yet there have been nearly 7.3 million job openings posted since the beginning of 2013. H.R. 1530 – the Opportunity Knocks Act – aims to help unemployed Americans get the training and education they need to start applying for the millions of available jobs,” he added.
In the bioeconomy industry, Caupert says, investment in education and workforce training is critical to ensure competent, qualified people for the future.
“Bio Economic Research Associates estimates that by 2016 an additional 380,000 new jobs could be created in rural America from the biofuels industry alone,” Caupert said. “By 2022, it estimates more than 800,000 new jobs could be created. Since January 2007, the National Corn-to-Ethanol Research Center has trained more than 600 unemployed or underemployed individuals and provided them the skills necessary to succeed in the new bioeconomy.”
David Stoecklin is executive director of Madison County Employment & Training. Stoecklin is a big supporter of any measure that promotes vocational training to equip the local, regional, statewide and national workforce to meet what he says is an obvious, growing demand.
“High unemployment exists at the same time as a skilled labor shortage,” said Stoecklin. “The vocational arts in our high schools have disappeared, and ‘alternative’ education has all but disappeared. Under the current scenario, if workers are not enrolled with us (Employment & Training), the feds won’t waive it. The bottom line, status quo, is that you have to be available and looking for work in order to meet the basic eligibility requirement to receive unemployment insurance benefits. And if you’re going to school, you’re not ‘available.’ But if you’re enrolled in WIA, they waive the job criteria. I think the principal inherent in H.R. 1530 is a good thing. It will afford people who are collecting unemployment and are in recognized programs the opportunity to complete that coursework/training, and the feds will weigh their work search as a factor. But the real test of this bill is going to be in getting it to people soon enough so that they’re able to act quickly, if they’ve been laid off, and get enrolled.”
Chancellor Julie Furst-Bowe says Davis’ legislation is a plus for the university because it’s a win for Southwestern Illinois.
“This legislation positively impacts the non-traditional student,” said Furst-Bowe. “Any opportunity that allows SIUE to help train the regional workforce and better people’s ability to successfully participate in the regional economy is a plus for this institution and Southern Illinois. This is legislation that works for SIUE and our region, now and in the future.”