The east and west ends of the New Mississippi River Bridge should meet midstream later this month. You wouldn’t think that such a feat of engineering and

construction would be easier to achieve then agreeing on a name, but you would be wrong.
Under the bi-state agreement to build the bridge, both states need to agree on a name, but that’s not going well. During the spring legislative session, the Illinois House passed a bill to name it the Veterans Memorial Bridge; the Missouri General Assembly countered with the Stan Musial Memorial Bridge.
You might think this is typical, St. Louis dysfunctionality and you would be right. But it’s interesting to note that this is neither new nor unique to the Mound City.
After all, the reason that we call the Poplar St. Bridge the Poplar St. Bridge is because the two sides could not agree on a name then, either. Similar to today, the St. Louis Board of Aldermen voted to name it after former Mayor Bernard F. Dickmann and the East St. Louis Chamber of Commerce decided it liked the Adlai Stephenson II Bridge better.
Dysfunctional, yes, but the same kind of thing has occurred in other places at other times.
It took the states of New York and New Jersey nearly three decades to finally agree to build a bridge over the Hudson River. They eventually broke ground in 1927; and like us, throughout its four-year construction, it was simply referred to as the Hudson River Bridge. Not until it was near completion did the Port of New York Authority announce it had decided to name it the George Washington Bridge instead.
That declaration was met with such a hue and cry that the Port Authority backed off of the name and announced that it would open the question up for public input. Numerous ballot boxes were placed on both sides of the river and nominations were accepted over a period of months. Tens of thousands of citizens casted their ballots and the newspapers kept daily running tallies.
When the balloting was closed in April of 1931, the Hudson River Bridge won by a large margin. Poor George Washington finished well back in the pack. Undaunted, the Port Authority named it the George Washington Bridge anyway, and it still is today.
America has no monopoly on bridge-naming controversies. About 10 years ago, the People’s Republic of Hungary was building a new bridge over the Danube River between Buda and Pest, the west and east sides of Budapest. The national Ministry of Economic Affairs and Transport decided to submit the naming rights to an online public vote. The plan was to take the three names with the most votes, include a few others from local governments, etc. and the name would be selected from that group by the Ministry. 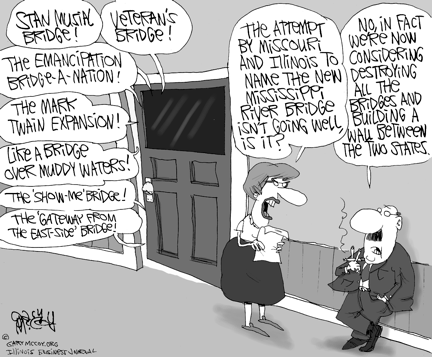 The unexpected winner of the online poll was American comedian Stephen Colbert with 17 million votes, nearly twice the small nation’s entire population. In September of 2006, Colbert was declared the winner and András Simonya, the Hungarian ambassador to the United States, appeared on The Colbert Report to announce it. Unfortunately for Colbert, the ambassador also declared that under Hungarian law, Colbert would not only have to be fluent in Hungarian, but he would also have to be deceased in order to have the bridge named after him.
That pretty well ended Colbert’s bid. Finally, later that month the Ministry announced the official name. You guessed it – the Megyeri Bridge.
Scotland is building a new bridge over the River Forth, estimated to be completed in 2016. Transport Scotland put out a call for names and got more than 7,000 suggestions including the Missing Link, the Haggis, Neeps and  Tatties Bridge, and May the Forth Be With You. It’s too early to tell how that will come out, but there has to be a better way.
The story goes that when Anheuser-Busch bought the St. Louis Cardinals and Sportsman’s Park in 1953 that Gussie Busch asked the baseball commissioner if he could change the name of the field to Budweiser Stadium. His request was denied. So he asked if he could give it the Busch family name. The commissioner was fine with that, so Sportsman’s Park became Busch Stadium. And the next year, Gussie started brewing Busch beer.
With that in mind, maybe the best way to handle the naming of the bridge is the way we’ve come to name sports stadia – sell the naming rights. Companies pay millions of dollars to hang their shingles on sports venues. It would end all the arguing back and forth between the states, the name could be quickly and clearly determined, and the money could be used to help maintain the bridge.
Hey, it beats calling it the Colbert Connector.
Alan J. Ortbals is vice president and chief operating officer of the Illinois Business Journal. He can be reached at aortbals@ibjonline.com.